The Greens want to see the light rail network deliver the best possible outcomes for Canberrans.

That is why we will ensure that the viability and benefits of extending light rail to Mawson is included in any planning of light rail stage 2B.

What would be covered?

This would include a potential expansion of the busy Mawson Park & Ride car park so that passengers from the southern half of Woden Valley as well as Tuggeranong could easily access light rail. This facility is already very popular and was at capacity prior to COVID.

The duplication of Athllon Drive between Mawson and Woden would be put on hold to ensure there is no need to dig up recently-constructed roadway to install light rail.

Advantages of extending to Mawson

The separation of timing for Stage 2A to Commonwealth Park from the rest of Stage 2B to Woden presents an opportunity to consider further options for Stage 2B. An extension from Woden Town Centre to Mawson is a low-cost option for expanding patronage over the City to Woden spine. It is short (approximately 2.4km) but will serve a number of busy areas, including:

Now is the right time to investigate extending light rail to Mawson because: 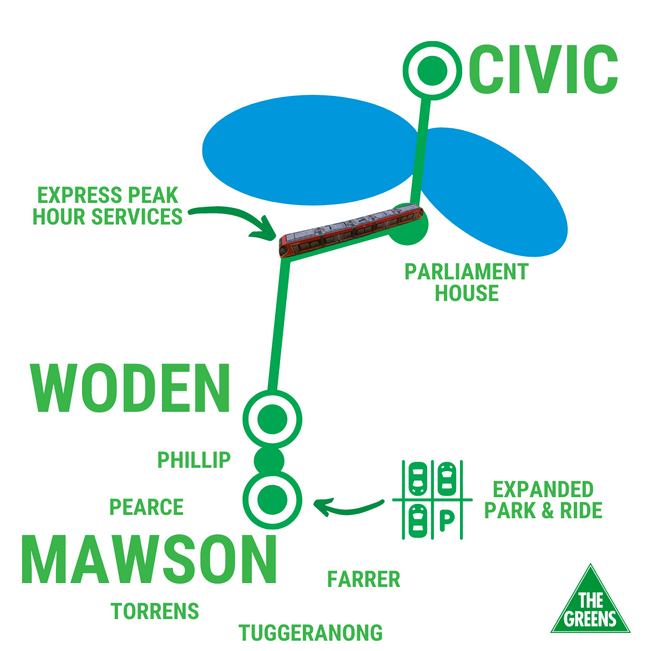 How many stops would there be?

It is likely there would be two stops, at Phillip and Mawson. However, community consultation and engineering work will be necessary to confirm this.

Where would the Mawson terminus be?

It is likely to be at the intersection of Athllon Drive, Mawson Drive and Beasley Street.  This would connect with the Park & Ride, schools and Southlands Shopping Centre.  However, community consultation and engineering work will be undertaken to confirm this.

How will this fit with express services from Woden to the City?

More Woden Valley residents would be able to catch express services to and from the City at peak hour.

Will light rail to Mawson delay stage 2B to Woden Town Centre?

No.  Light rail from the City to Woden has been split into two stages and the second stage has been delayed by complicated federal planning approvals for the Parliamentary Triangle.  As a result, there is now time to consider the Mawson option.

Extending light rail to Mawson would not delay Stage 2B construction as it could be constructed as part of, or immediately after, Stage 2B if necessary.

How much will it cost?

While the engineering investigation will reveal the full cost, it is likely to be relatively low because:

Light rail to Mawson would only go ahead if it is shown to be financially sensible by engineering investigations and a business case.

Would buses from Tuggeranong terminate at Mawson?

No, the major bus and light rail interchange would remain at Woden.

Will this cancel or delay light rail to Belconnen?

No.  It is a short extension, not a major new route.

Why not just go the whole way to Tuggeranong?

Light rail the whole way from Woden Town Centre to Tuggeranong is much longer and more complicated.  It would be around 10km, compared to around 2.4km to Mawson.

Find a PDF copy of our plan here.