Future land sales in Gungahlin will be focused on generating employment and community vibrancy, now a motion put forward by Greens MLA for Yerrabi Andrew Braddock has passed with support from both parties of government.

The motion was debated and passed in the Legislative Assembly today, following earnest and constructive negotiations on how the government will achieve shared commitments in the Parliamentary and Governing Agreement on: improving the planning system, giving residents a stronger say on how their neighbourhoods develop, delivering public and affordable housing, tree canopy targets, and good social outcomes.

“I’m pleased to have pulled the government’s focus to the Gungahlin Town Centre where we have an incredible opportunity to develop a place to be proud of,” Mr Braddock said.

“Residents in Gungahlin can now be assured our sights are set on delivering a great Town Centre in Canberra’s north, where people can live, work and play.”

Today’s motion has seen the government commit to:

“This is a really positive step toward developing a Gungahlin that is vibrant and sustainable. I want to make Gungahlin a destination - home to great entertainment, community and family events, retail and employment opportunities,” Mr Braddock said.

“Elevating community voices is so important because people in Gungahlin have a vision for this place. Since tabling the motion I’ve heard such a breadth of creative ideas, like desire for a music studio, a hospital, arts spaces, community halls, coffee carts and better playgrounds, to name a few.”

For the past two months, Mr Braddock has been hosting a ‘Possibilitree’ where people can share their ideas, both online and in person.

Alan Hough, a resident in the Gungahlin suburb of Franklin contributed to the Possibilitree and wants to see a future where Gungahlin has ‘more soul’: “The main intersection where the tramway ends is largely concrete, I want to see more greenery, a vibrant dining precinct and some live music venues.”

Local resident Haley, who was interviewed as part of Mr Braddock’s ‘Humans of Gungahlin’ project suggested: “I’d love to see a children’s hospital, or a hospital at least, that we can bring our kids locally to rather than going all the way to Woden.”

Mr Braddock said: “This motion is not the last word on the future of Gungahlin Town Centre.  There is a committee inquiry currently underway and I strongly encourage everyone who is interested to make a submission.”

Submissions on a proposed variation to the Territory Plan are open until the end of June. Details on how to make a submission, and the proposed variation are available here: https://www.parliament.act.gov.au/parliamentary-business/in-committees/committees/ptcs/inquiry-into-draft-variation-364-gungahlin-town-centre.

Further contributions to the Possibilitree can be made by visiting: https://padlet.com/Andrew_Braddock_MLA/possibilitree 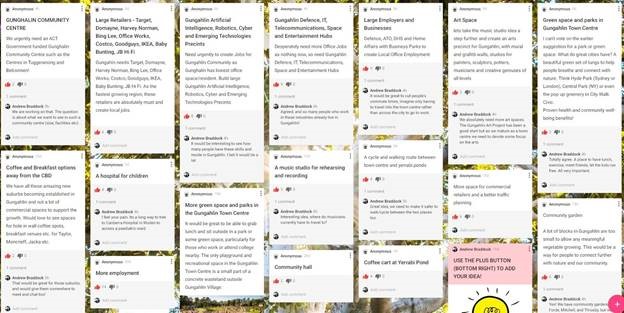 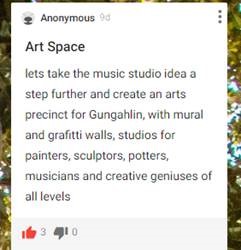 A suggestion on the digital Possibilitree 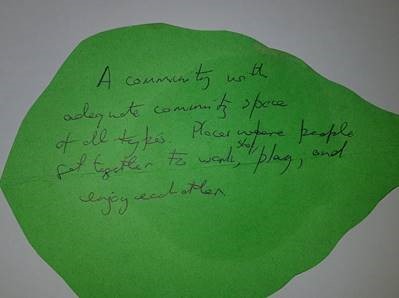 A leaf from the physical Possibilitree