Government’s planning changes would fail on trees and climate

As Canberra swelters through another record-breaking summer, the Greens today expressed concern that proposed Government rule changes will fail to provide the increased tree cover that Canberra needs in the future.

In September last year, Greens leader and Minister for Climate Change and Sustainability, Shane Rattenbury, launched Canberra’s Living Infrastructure Plan, which committed the Government to bold new targets: a 30% tree canopy cover and 30% surface permeability by 2045. The Plan sets out the steps that will be taken to get to the targets, including making changes to planning laws.

However, Planning Minister recently released Draft Territory Plan Variation 369 – Living Infrastructure in Residential Zones, which Greens analysis indicates will not achieve these targets. For some development types, such as multi-unit developments, the tree canopy requirement is as low as 15%.

“The Greens fully support the commitment to 30% tree canopy cover; that is a target that will help us adapt to climate change and make our city more cool and liveable. But the Government must act and plan consistently with that target to ensure it is met,” ACT Greens Planning spokesperson Caroline Le Couteur said today.

“The Government’s proposed planning rules are not good enough to ensure a suitable future tree canopy. They aren’t consistent with the tree canopy targets. We’re calling for improvements to ensure Canberra has sufficient trees in the future; it is what Canberrans want, and it is particularly important as the climate warms,” Ms Le Couteur said.

“The Greens are here to ensure the ACT Government makes ambitious climate change commitments, and then sticks to them. These proposed planning changes won’t deliver what has been promised, particularly when it comes to trees. We can’t let the Government fall at the first hurdle, and the Greens will be seeking changes,” Mr Rattenbury said.

“Canberrans want to live in a city where trees feature prominently, as they provide amenity, habitat, and keep the environment cool as the climate warms,” said Mr Rattenbury.

The Greens have long advocated to improve tree canopy in Canberra. Recently, Caroline Le Couteur introduced a motion in the Assembly, calling for three reviews to ‘make room for trees’ in development and to get better protection for existing trees. In 2019, Mr Rattenbury launched the Living Infrastructure Plan, which committed the Government to a range of actions and targets. 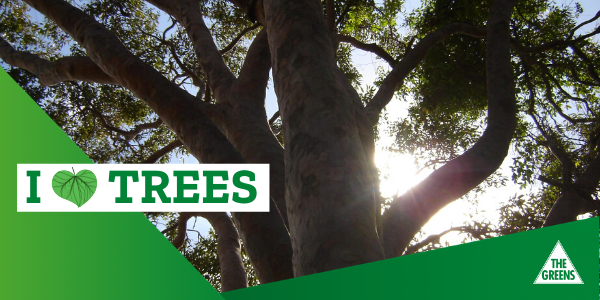 If you would like to make a submission to the ACT Government on this issue:

Suggested points to include in your submission

Cooling our city for climate resilience

Why permeable surfaces are important

The value of trees

Changes are needed in how our suburbs are developed

The Greens strive to maintain Canberra as the ‘bush capital’, to ensure any new suburbs are built with enough room for large trees, and to prevent the loss of so many trees to redevelopment. We’re pushing for a better outcome on Canberra’s living infrastructure, and we hope that you join us by making a submission.

For more information and guidance on making a submission refer to the linked PDF below.