Jo Clay is the ACT Greens spokesperson for the Circular Economy.

I've worked in the recycling industry for over a decade. When I began, the buzz was all about zero waste. This focussed on the linear goal of keeping waste out of landfill. No one much minded where it went so long as it didn't cross a weighbridge. Exciting times!

The ACT set the world's first big target in the 1990s, proudly painting No Waste by 2010 on all the garbage trucks (presumably to promote their upcoming redundancy). Jurisdictions around Australia and the world followed with their own zero waste targets. But no one has ever delivered on the promise of a waste-free society.

The bold goal was partially effective. Between 1996 and 2010, ACT Government worked with industry to create big new programs to recover big new waste tonnages. Recycling more than doubled. Waste to landfill dropped. Our population increased during that time, so the figures looked even better on a per capita basis. But we never made it past 75% resource recovery of our total waste.

When I began working in waste management, government was being roasted by the critics for failing to deliver. 2010 rolled around. We hadn't eliminated waste and we still needed the garbage trucks, so we quietly painted over the slogans. In the decade since, no one has set any bold goals and little progress has been made. Recycling has flat lined ever since. 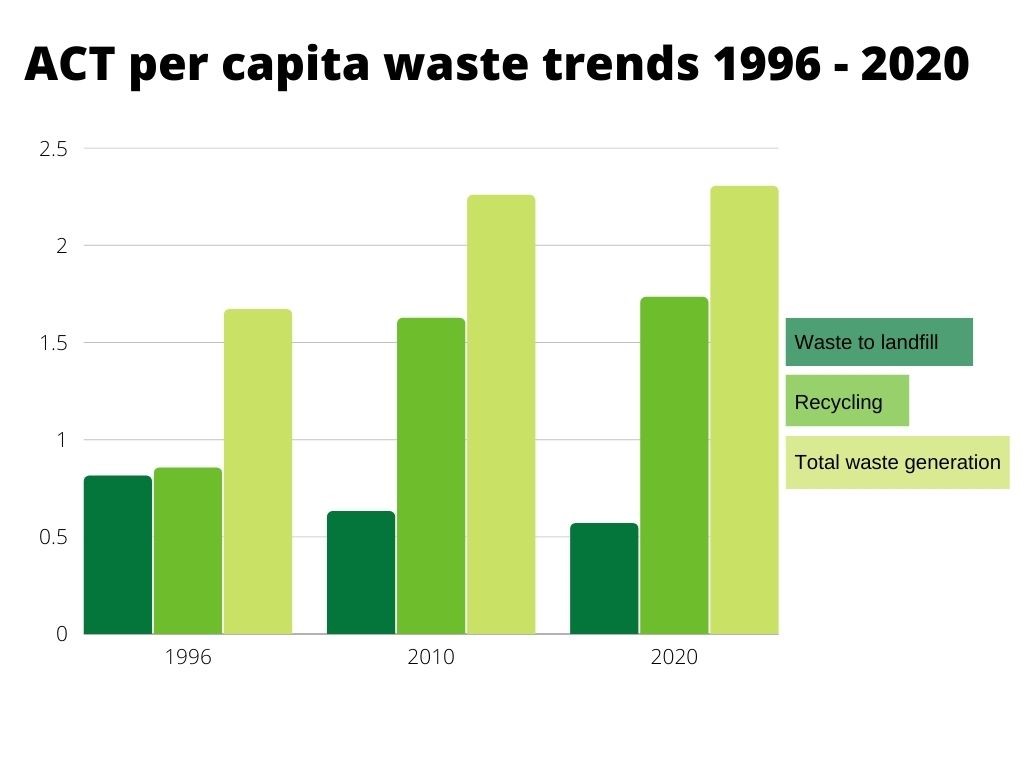 Was No Waste by 2010 a failure? That depends on what you mean. The target led to massive changes in waste management, like new construction and demolition recycling plants, transfer stations, tip face sorting and a huge green waste self-haul system. It took waste diversion from under 50% of total generation to around 75%. But this focus ignored the real problem with waste: that it is increasing.

In 2010, Canberra recycled 587,700 tonnes. That's more than Canberra generated in total in 1996. We might have met that No Waste target if total waste generation remained steady. But it's gone up and up and no government in the world has yet managed to tackle this fundamental problem.

This is not unique to the recycling sector. Every field of environmental management is struggling with the same issue. Increasing consumption means we are using more natural resources, like water, minerals, land and energy, and we are generating more by pollution, like waste and greenhouse gas emissions. This same issue has caused climate change, habitat destruction, resource scarcity and the collapse of our natural systems.

The problem is that we are stuck in a linear system. We dig stuff up and make it into stuff to sell and after that, it's waste. All this commerce makes the magic lines go up - unit sales, profits, tonnages recovered. But it also makes other lines go up. Eventually we'll run off the page.

We can't keep thinking in straight lines. We need to think in circles.

Years after I left government, I found myself chatting to a former colleague, Graham Mannall. Graham had helped author that bold No Waste by 2010 strategy but had since retired. He'd come up with a new idea to tackle a problem waste stream and he was looking for a partner. We were both new to business and distracted by other projects - me with a book and a baby, Graham with his golf handicap - so it took us longer to pull together than it should have but we managed to launch Send and Shred.

Send and Shred is a secure shredding service for homes and small businesses. Customers buy a Send and Shred bag, fill it with confidential paperwork and lodge it in any post office. The bag and its contents are securely transported, shredded and recycled.

The service replaces the home shredder. If you've ever cleared a paper jam, you know that home shredders are pretty awful to use. They're also incredibly wasteful. Shredded paper can't be recycled in Material Recovery Facilities because the strips and confetti get caught up in the machinery. If you shred at home and put it in a yellow-topped recycling bin, it ends up in landfill. Worse, the shredders themselves become E-waste and they're not covered by any E-waste recycling schemes. Around 1.5 million home shredders end up as E-waste in Australian landfills each year. It's a poor product that's unpleasant to use and it leads to bad environmental outcomes.

Between 2017 and 2020, we designed our packaging, set up our system, patented the method, did customer research, tested price points, set up in ecommerce and established a customer base. We've since sold the company but it was quite a journey. Here are some of the lessons I learned about the circular economy along the way.

1. Don't step into the circle

The waste hierarchy begins with avoidance. But governments and industry rarely tackle avoidance because you can't boast about something that never happened and you can't sell nothing.

Send and Shred is an avoidance scheme. Its first and proudest goal is to eliminate the home shredder. All those millions of bits of E-waste and the resources they represent - embedded emissions, energy, plastic and precious metals - need never be consumed. This is one reason why services are often held up as more environmentally friendly than products. In a capitalist economy, selling a service is one of the few ways you can make money without creating waste.

2. Draw a circle from the start

Everyone in our company came from the recycling industry so we were committed to full resource recovery from the outset. We designed it in from the beginning.

Recycling the paper was simple. Our bags contain clean office whites which are shredded, baled and sold to an Australian pulp mill to be turned back into new paper products. We weren't affected by the China waste ban because our stream is so clean. But the packaging and logistics were harder to get right.

Our original idea was to sell a cardboard box in the post office. Customers would buy it when they were running other errands, which meant no wasted transport emissions. They'd fill it up with paperwork, drop it back on their next trip and the whole thing would be shredded and recycled.

This turned out to be impossible.

Australia Post wasn't ready for a new shelf product like ours. We turned to ecommerce instead (weren't we glad when COVID hit!) but that meant extra freight emissions to deliver the product to our customer.

Australia Post provided us with expert design input, which showed our cardboard box wouldn't work. They also gave us the 'kitchen table' test - if you can't chuck it over the kitchen table ten times without breaking, it's not strong enough to stand up to postal handling.

After testing out 50 different designs, we realised that a cardboard box, a thick paper satchel or any other paper-based variation simply wouldn't work. They weren't strong enough to hold heavy loads of paper through the postal system and we couldn't pack them down for easy shipping to our customers.

We ended up with an extremely strong self-sealing plastic bag. Our design is based on police evidence bags and bank coin bags and it performs beautifully, but few people consider a fossil-fuel based plastic to be environmentally friendly. We set up a relationship with plastics recycler, Plastic Forests, in Albury. They handle the Red Cycle plastic and the system complements our paper shredding. Everything in our bag, including the bag itself, is recycled. We also wanted to make the bags out of recycled material, but when we commissioned our first run, the factory couldn't produce a strong enough product without using virgin material. I'm hopeful that future production will crack this problem and use recycled plastic or a bioplastic. It's a work in progress.

3. Include the full circle

Whilst running Send and Shred, I embarked on another project called The Carbon Diet. I cut my carbon footprint and that of the average Australian by 75%, one week at a time. I learned carbon accounting and was horrified to see the impact of freight emissions on our overall footprint and consumption.

Large efficient delivery by truck, rail or sea generates low emissions per product. But small-scale delivery using fossil-fuel cars or vans is very carbon intense and air freight is the devil. E-commerce relies on these carbon-intense delivery methods so our increasing trend to shop online is making this much worse.

I flinch every time I see an environmental product ordered online from an overseas vendor because it flies into the country. And those products that require you to make a special car trip to buy it, or to return the packaging? They are not environmentally friendly no matter how much they rely on second-hand, recycled, all-natural stuff.

Send and Shred isn't too bad. The delivery chain relies on slow efficient postal delivery with no air freight. The increasing electrification of our transport system will help us out even more. But the carbon footprint of our freight logistics is huge, poorly understood and rarely factored in by governments or industry.

Our Send and Shred sales took a while to climb, which is what happens when your CEO and chief sales officer is a diehard greenie who thinks no one should buy anything ever. But climb they did, to the point where we managed to sell the company with that magic start-up chart featuring a line going up.

I still feel conflicted about this. I'm hoping steps one, two and three mean any environmental damage is made up for in environmental benefits. But the experience has forever marked me. Our world says more is better and growth equals success. Everything about business and the start-up community confirm this. We are still pushing lines when we know we need to draw circles.

I'm now a member of the ACT Greens-Labor Government. I'm also the Greens crossbench spokesperson for the Circular Economy. There's a lot to do.

I'm pleased to say that the Government’s minister for waste understands the problems we need to face. We've started a food waste reduction program and we have municipal food waste recovery on the horizon. We have some other small schemes planned. We use the phrase 'Circular Economy' as often as possible. But fundamentally we're still stuck in a linear economy that's made little progress over the last ten years. There is more work to do.

I'm hoping to take what I've learned about circles and find out more from industry, locals and government. Let's see if over the next ten years, we can start drawing that circle.

Jo Clay is a Greens member of the ACT Legislative Assembly, founder of 'The Carbon Diet' and co-founder & former CEO of recycling company 'Send and Shred' (GGJC Pty Ltd).