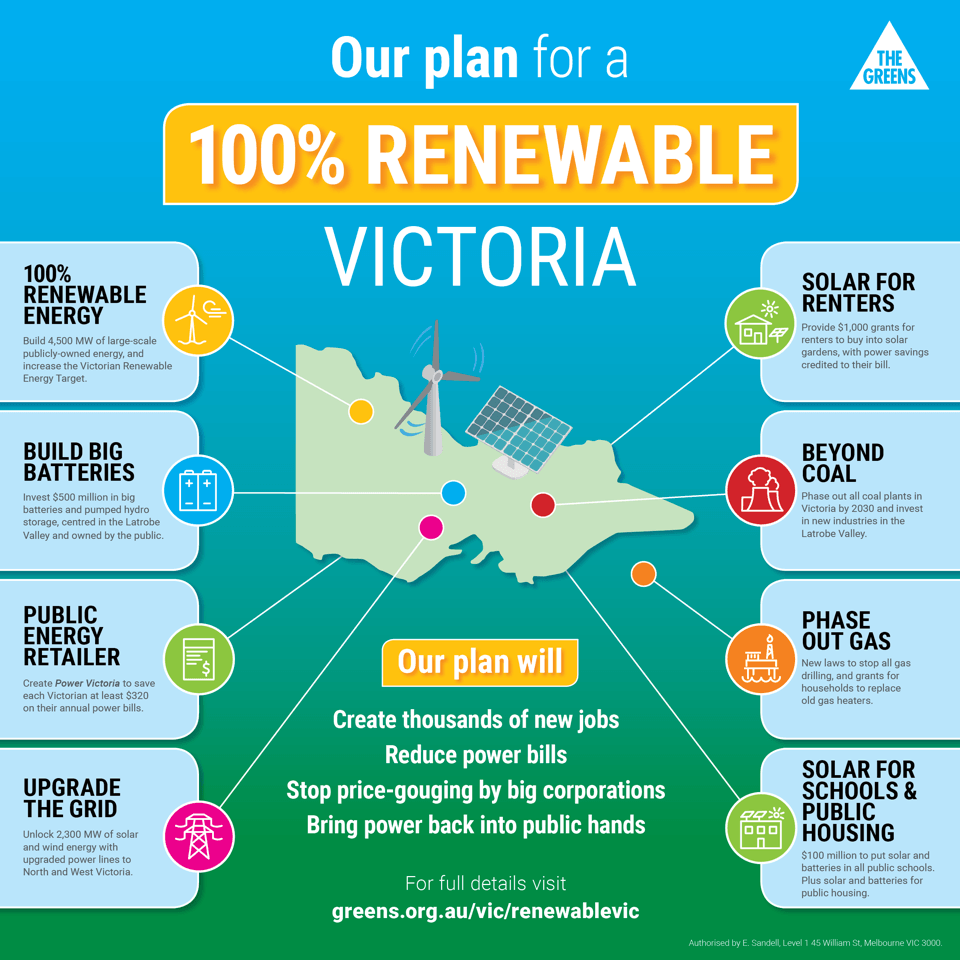 The energy market is broken. It is dominated by a few big companies who are pushing up prices and holding back the transition to renewable energy for their own profits.

When Kennett handed over our electricity system to private corporations to make a profit, it made electricity more expensive, less reliable and kept it dirty.

By selling our public assets and essential services, Labor and the Liberals shirk their responsibility to our community and expect all of us to pick up the tab.

When we, the public, own our energy system, it exists to benefit all of us. Electricity is essential for all of us to live a good life, and it’s too important to leave to a few big corporations.

The Greens plan will transition Victoria’s energy away from dirty, polluting coal to 100% renewable energy by 2030.

Our plan is to increase the Victorian Renewable Energy Target (VRET) to 30% by 2020 and 50% by 2025, to help us get to 100% by 2030. The Greens would achieve this by a combination of building publicly-owned large-scale renewable energy, which all Victorians will own, and supporting private and community projects through an expanded VRET.

The Greens’ bold plan to bring power back into public hands includes:

Coal companies have run our energy system and are ripping us off with over-priced electricity, complex contracts and undecipherable bills.

The Greens’ plan would build $9 billion worth of publicly-owned energy generation across Victoria over the next ten years. This will create jobs, drive down energy prices and give our kids the chance of a future free from dangerous pollution and climate change.

The Greens plan would also invest $500 million in big batteries and pumped hydro storage, centred in the Latrobe valley and owned by the public.

Parts of regional Victoria have enormous renewables potential, with a great wind and solar resource ready and waiting. But right now, 2300 megawatts of renewables projects across north and west Victoria are being held back because the grid hasn't been upgraded. That’s the equivalent of 1.5 Hazelwood power stations!

Our plan will urgently invest the money needed to upgrade the grid, with the upgraded sections owned by the public, to unlock a solar and wind boom across north and west Victoria.

Dirty coal belongs in the past

Coal mines must be phased out, and quickly, to guarantee a safe climate. And we must do it in a way that supports people and communities.

The Greens have mapped a timetable for all coal power stations to be replaced by clean energy by 2030, giving communities advance notice so we can invest in new industries and jobs well before 2030. This will ensure a fair transition for workers and their communities.

Licence extensions, like those announced by the Andrews Labor Government in mid 2018, are disastrous for the climate and misleading for workers and the community. It puts their future in the hands of big coal companies, who are only interested in their own profits.

Victoria’s power stations are Australia’s dirtiest, and some of the dirtiest in the world. They spew out huge quantities of toxic sulphur, mercury, nitrogen and particle pollution.

The Greens plan requires power stations to introduce clean technologies for the remainder of their operating life, to stop toxic pollution and protect the health and well-being of the Latrobe Valley community.

A just transition for the Latrobe Valley

Privatisation was devastating for the Latrobe Valley. Communities are often kept in the dark, like they were when Hazelwood closed. The Greens’ planned transition will ensure this doesn’t happen again.

The Latrobe Valley has huge potential for new industries and jobs. The planned replacement of coal with renewables is a new beginning.

With the enormous energy network capacity already in place, the Latrobe Valley is the perfect place to create a battery and storage test-bed for the world.

The Greens plan for the Latrobe Valley would:

For too long, big energy corporations have created unfair barriers to community energy. It's well past time this was fixed.

The Greens will continue to advocate to the Federal Government for reform to the regulation of electricity metering, and to network connection, to enable the community to take clean energy into their own hands.

The Greens will further support community energy with:

Further policy information about our plan for a 100% Renewable Victoria is available here.