On 12th December, some 150 Greens (WA) members gathered at the Bendat Community Centre, Lake Monger, to celebrate the 30th anniversary of Greens (WA). The Greens (WA) was formed in 1990 from a coalition of progressive political groups with interests in peace and disarmament, environment and conservation, gender equity and social justice. The party’s first senator was Jo Valentine, who had been in the Senate since 1984 representing the Nuclear Disarmament Party. She was re-elected in 1990 as the first Greens Senator in Australia. 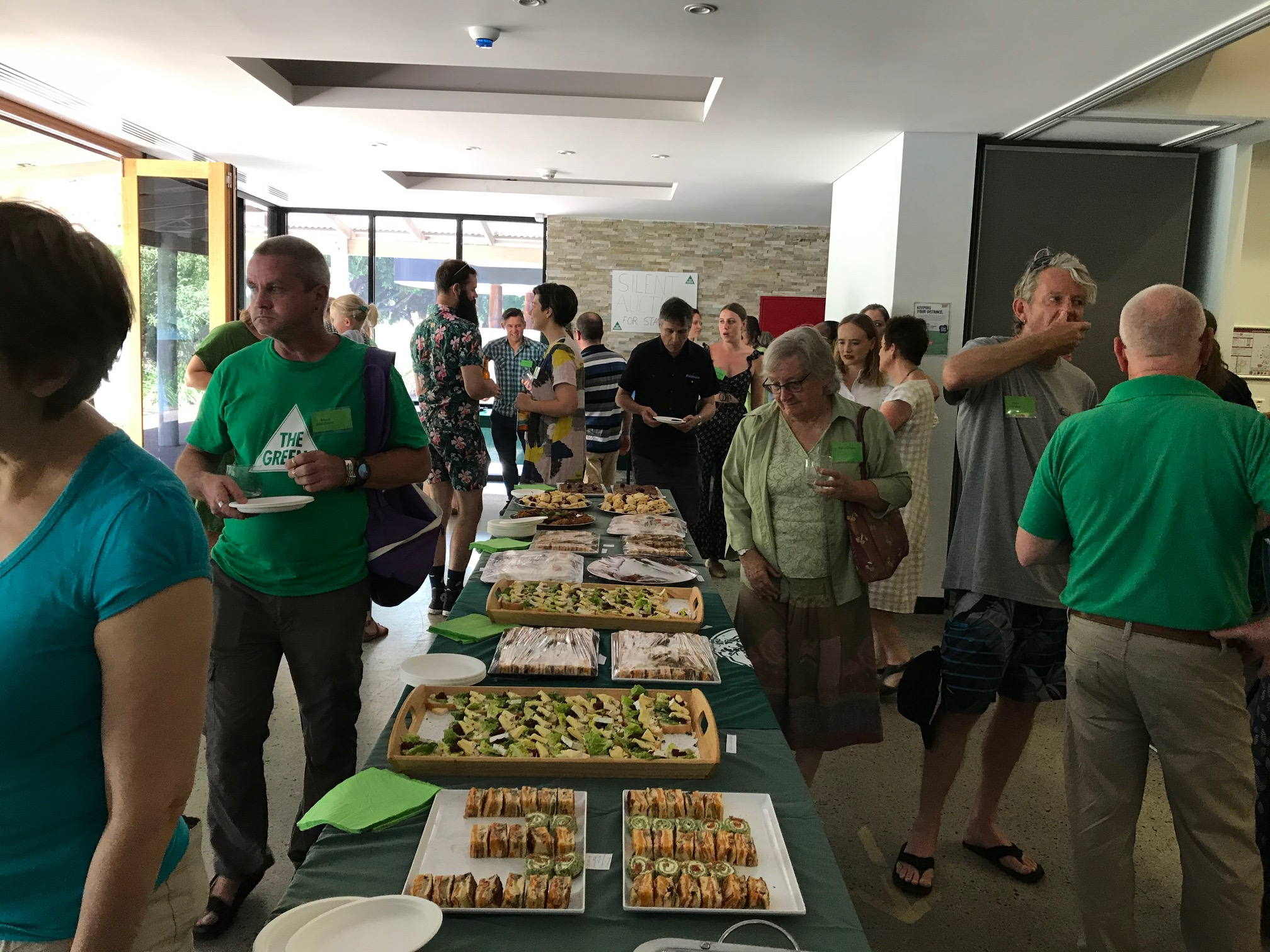 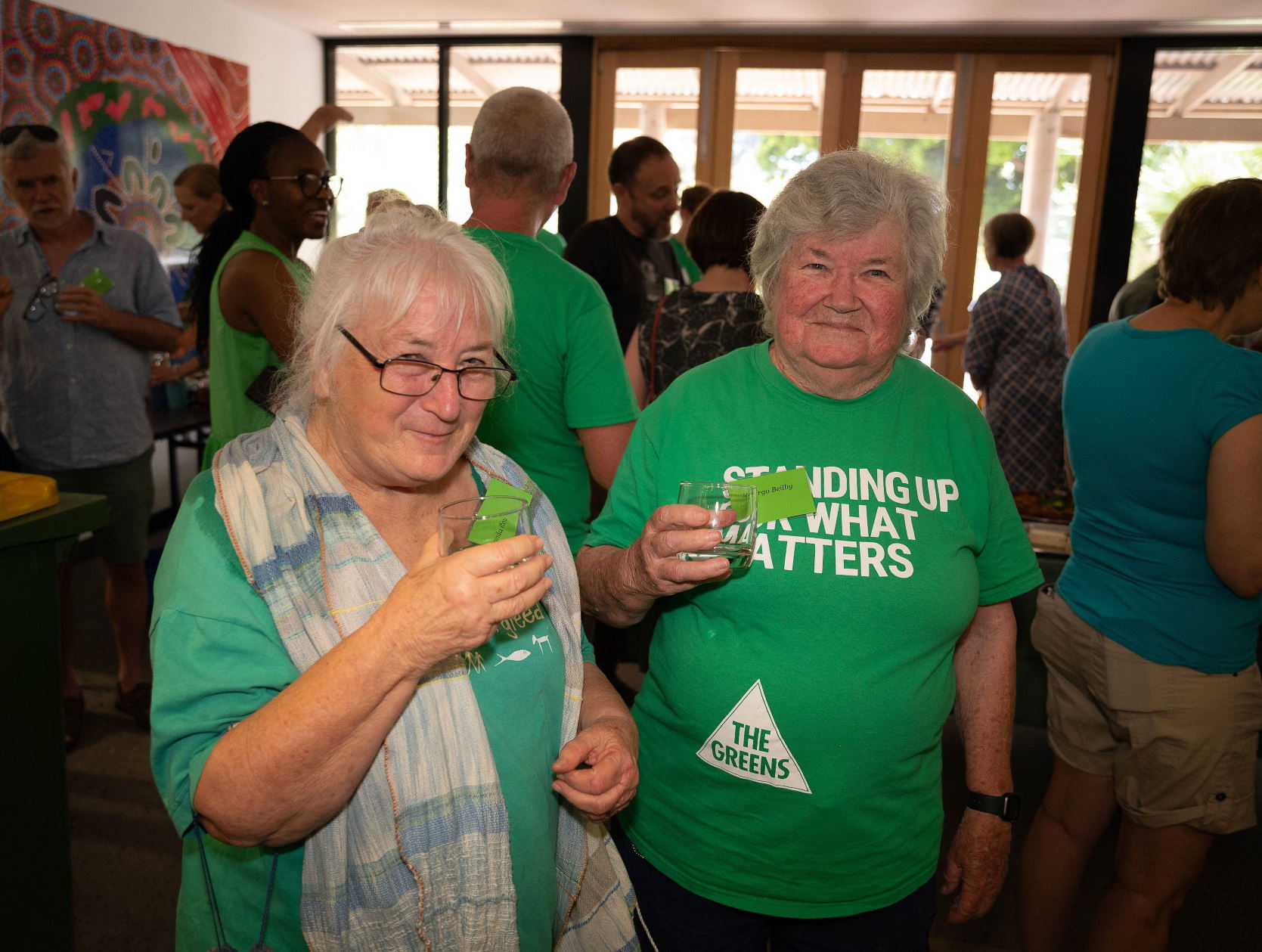 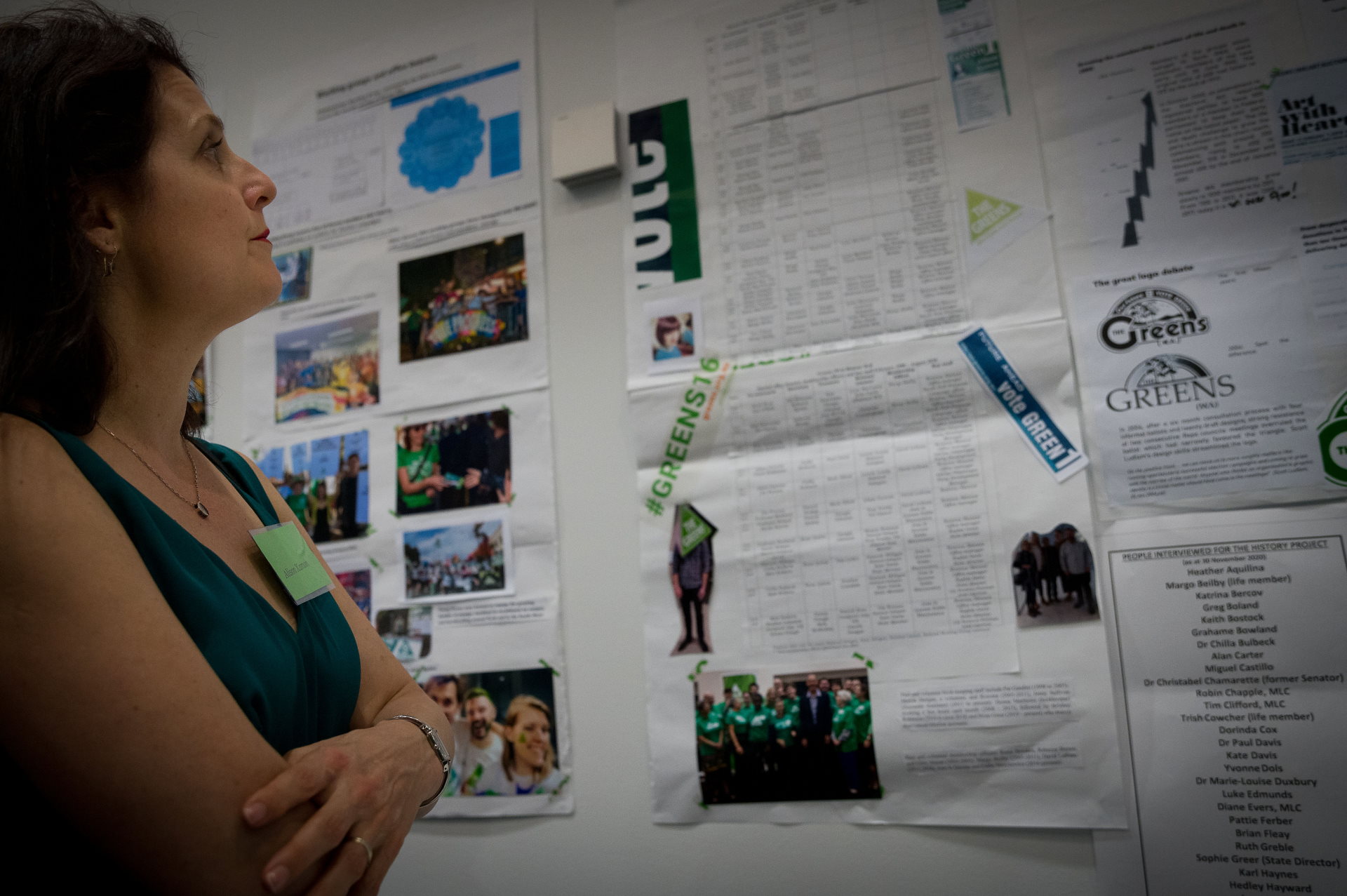 Before and after the presentations there was plenty of time for members to catch up with colleagues, some perhaps not seen for a long while, while partaking of an enticing layout of nibbles and drinks. And a chance to see the wall charts depicting the history of The Greens (WA). 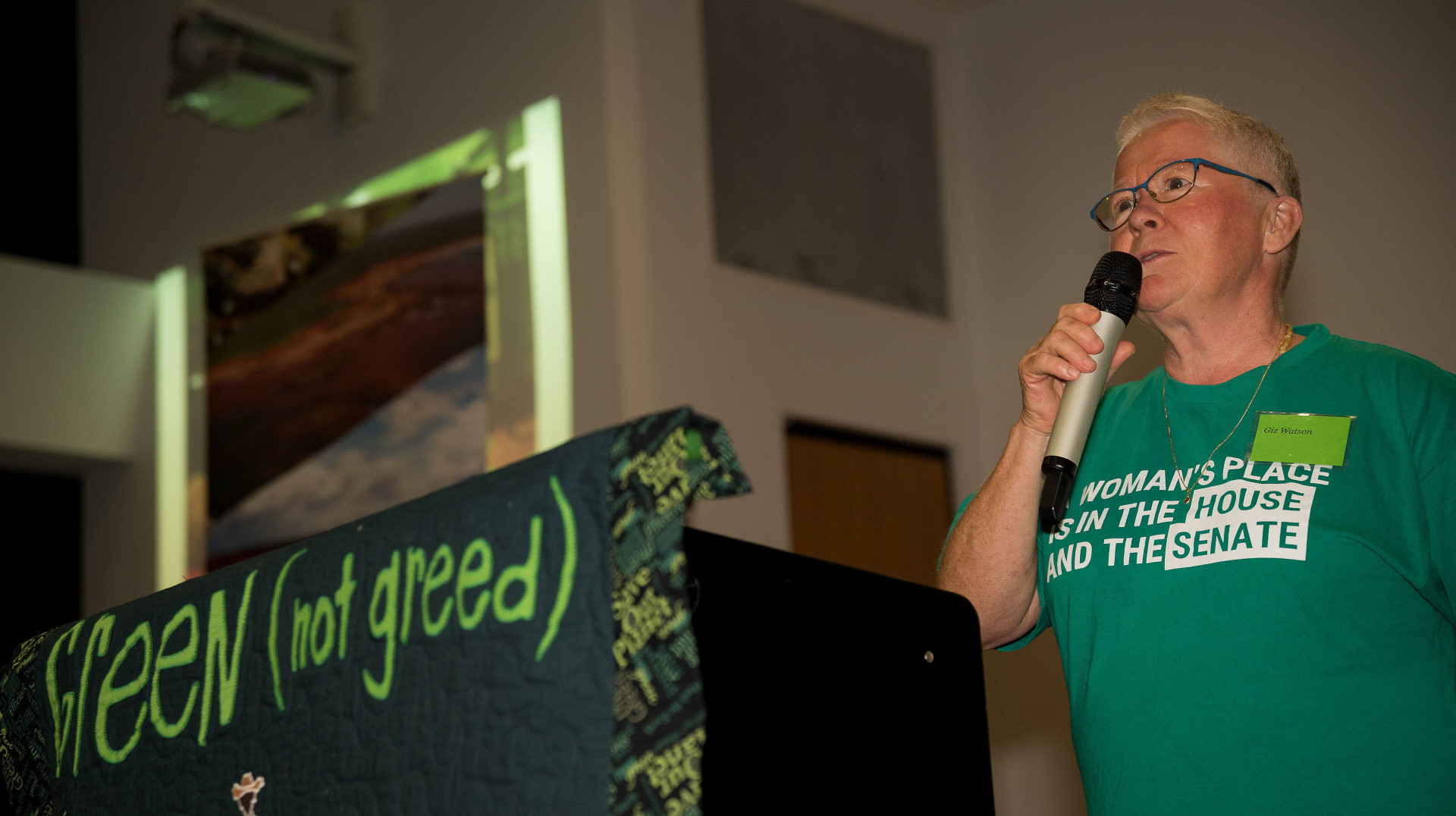 Giz Watson, Greens MLC for North Metro during 1997-2015, compered the proceedings in typical rollicking manner. Giz pointed out that The Greens (WA) have prevailed over a relatively long period, 30 years, and the trend line is gradually upwards. Many parties, beginning as minor parties, simply do not last the distance for one reason or another (often internal squabbles), e.g. Australian Democrats.

Giz had the aspirational goal of restricting speakers to 2 minutes each. But, the speakers were all politicians, past, present and aspiring, and the only way of being able to realize that aspiration would have been to have a facility to switch off their microphones, which she didn’t have. 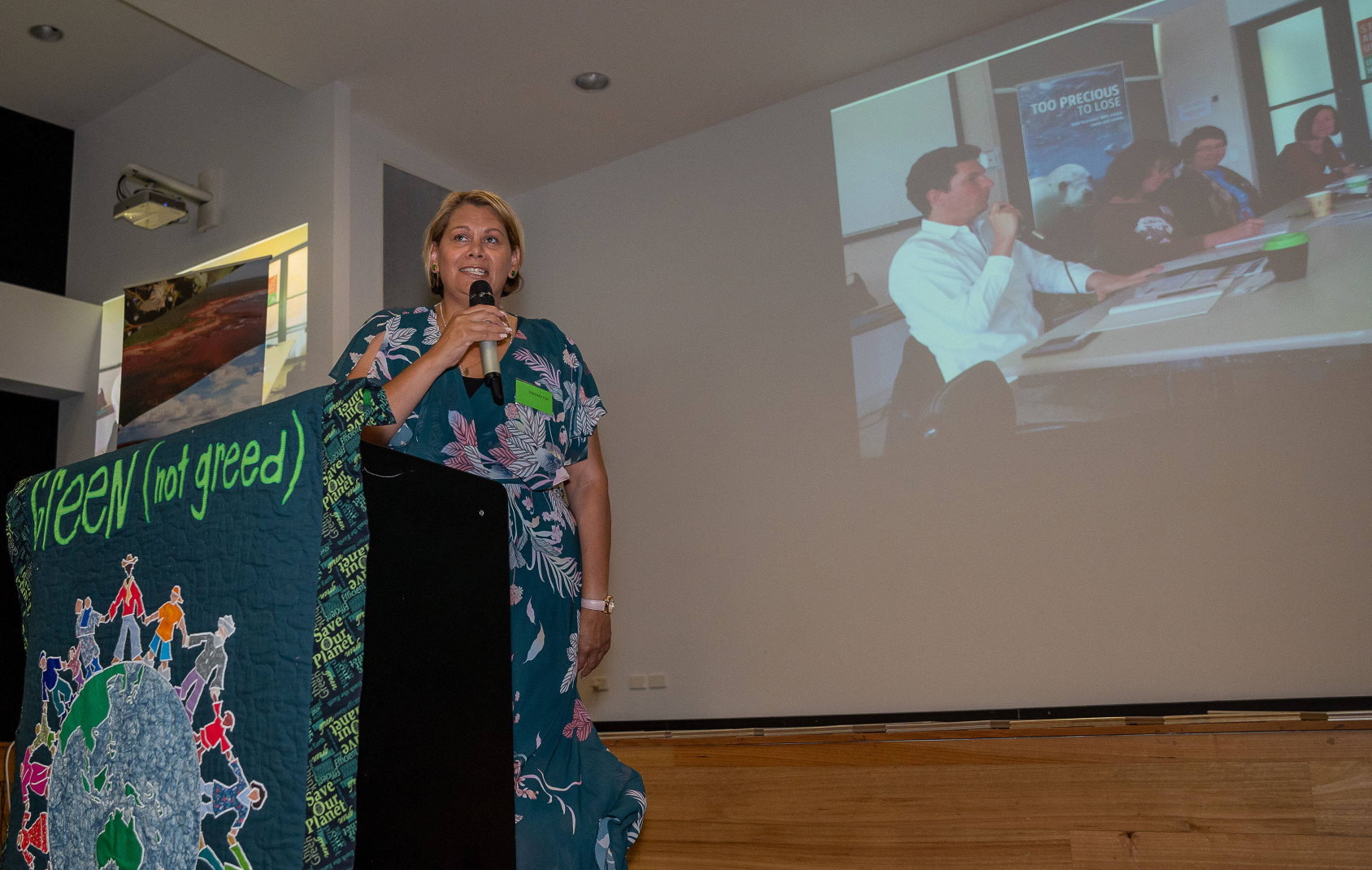 Dorinda Cox, our candidate for the next Senate election, gave an Acknowledgement of Country. She pointed out that we were meeting at a special location, Lake Monger, or in Nyungar language Keiermulu. For millenia, First Nations people have gathered here as it is an important site of Nyungar mythology – the place where Wagyl, the Rainbow Serpent, on his journey towards the sea emerged from the ground to give rise to the lake (the lake is connected to the Yarragadee aquifer). Dorinda also pointed out that The Greens are the only party with parliamentary representation whose policies align with the aspirations of First Nations peoples – truth telling, a fair treaty, social justice, care for Country, etc.

Jo Valentine presented her perspective of how the p 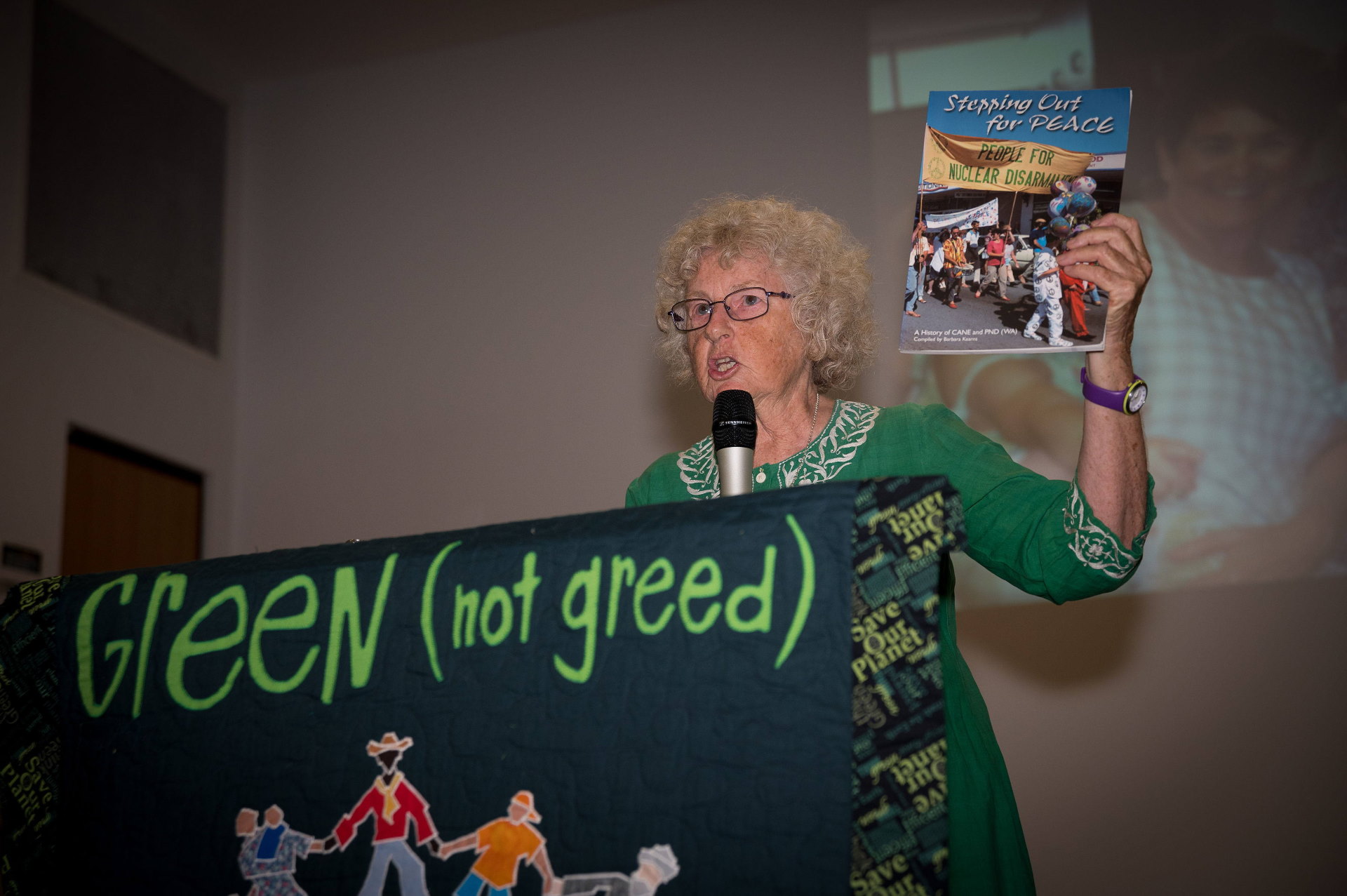 arty had travelled over the last 30 years. She acknowledged the growth of the party and was optimistic about it exerting increasing influence into the future, with the many talented younger members coming through. But she couldn’t resist in harking back to her own beginnings in the peace and nuclear disarmament movement. She advertised a major global milestone coming up on 22nd January 2021 – when the Treaty on the Prohibition of Nuclear Weapons comes into force. 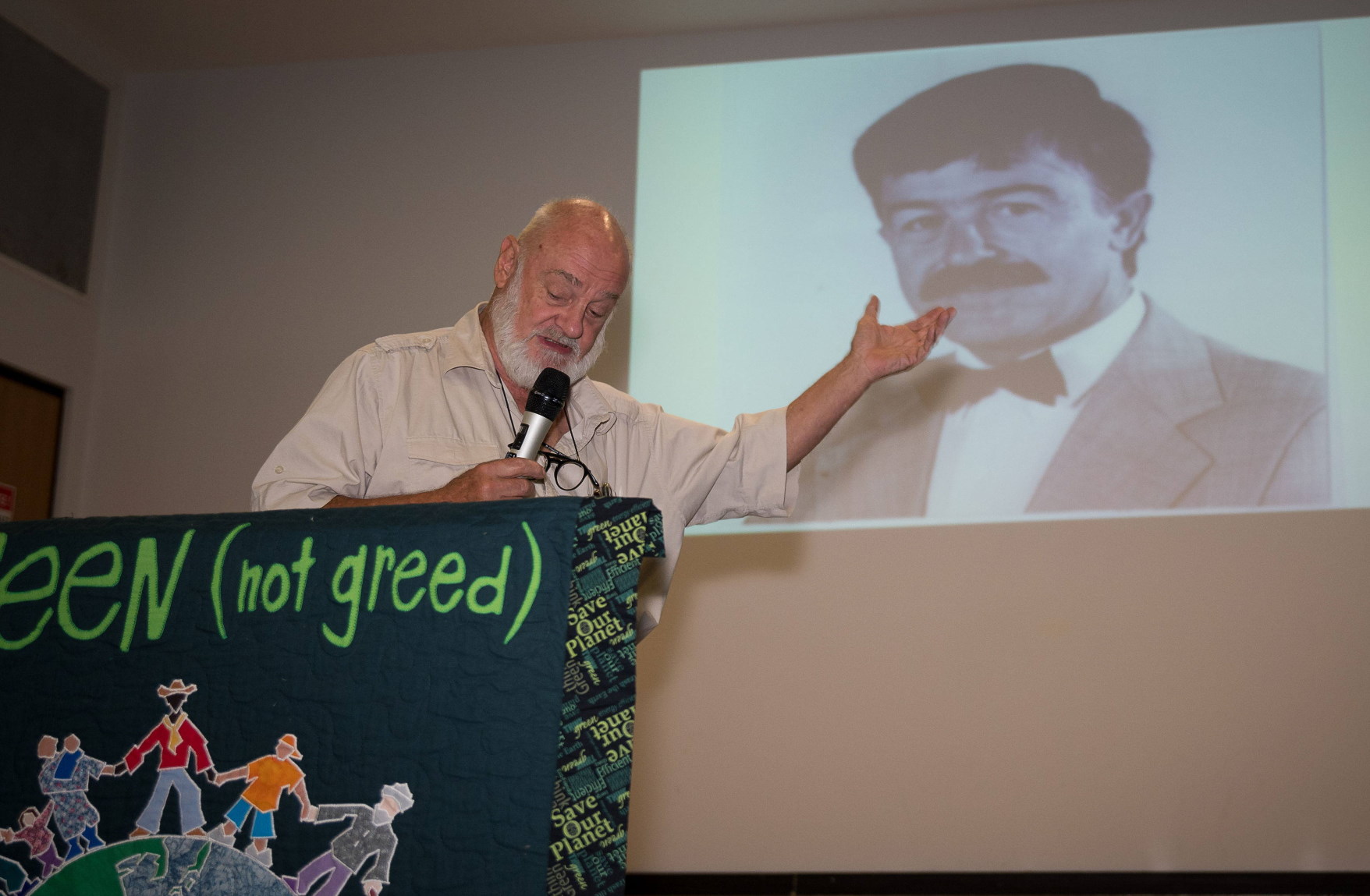 Robin Chapple has been in the Legislative Council since 2001 (Mining and Pastoral Region) and will be retiring at the end of this parliamentary term. He expressed disappointment at the results so far of legislation introduced by The Greens actually being passed by parliament. The only such legislation achieving success was the Voluntary Euthanasia Bill, passed a year ago, after having first being introduced by Robin in 2002. Robin was particularly disappointed to witness such existentially important legislation as the Climate Change Bill introduced this year by Tim Clifford being essentially ignored by the other parties in parliament. Nevertheless, the assembled throng seemed to disagree with Robin’s conclusion of disappointment. They gave him a rousing “thank you” for all of his work and advocacy on behalf of us all over the last two decades. 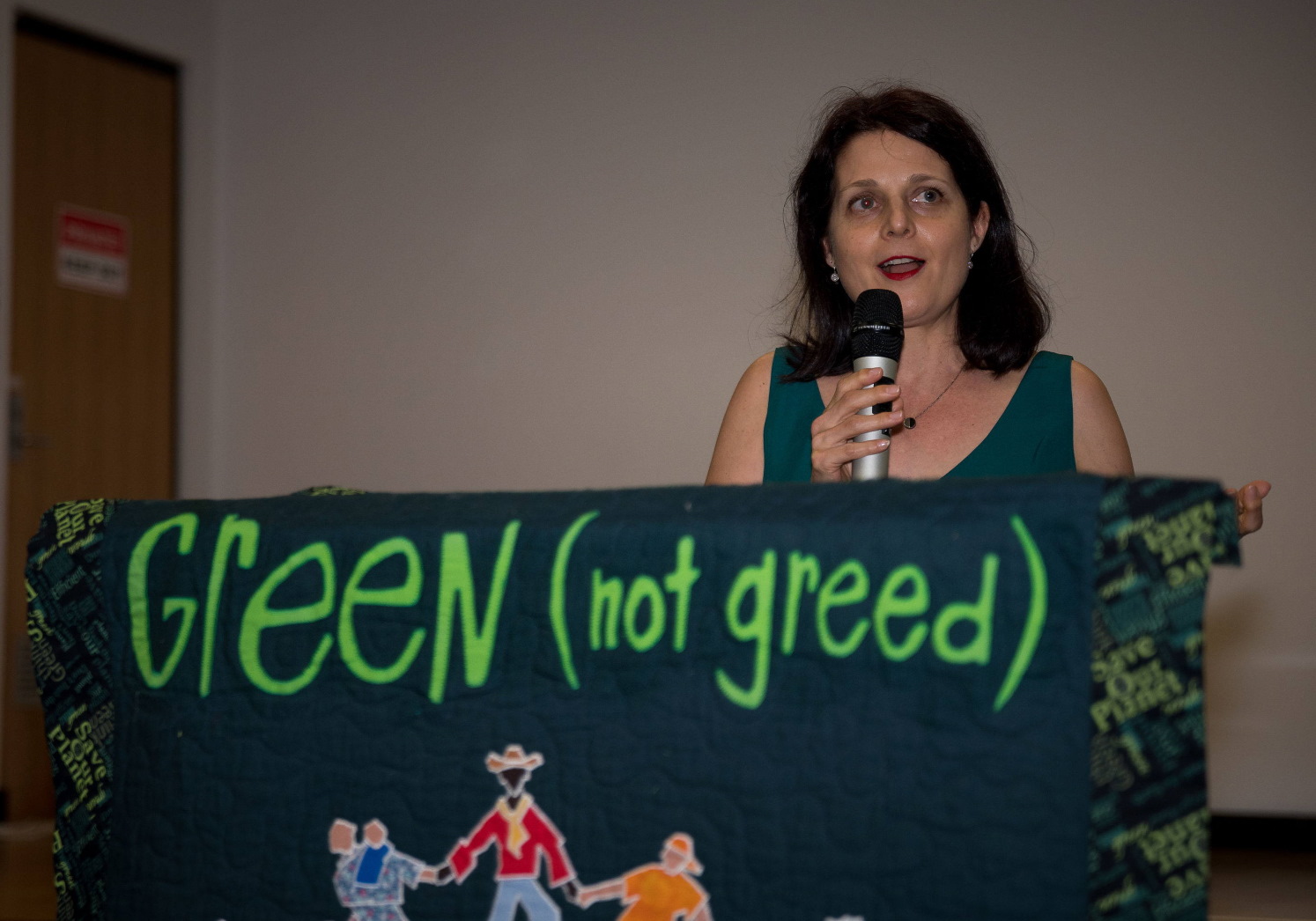 h Metro 2017-21, was full of enthusiasm for what we are about to achieve into the future. On most issues The Greens stand out in front, albeit often alone. But as time progresses, our views on many of those issues attract ever-increasing public support. She believes that one day The Greens will govern, or at least achieve “balance of power” influence. But a pressing issue is to clean up government, to make it more transparent and accountable. 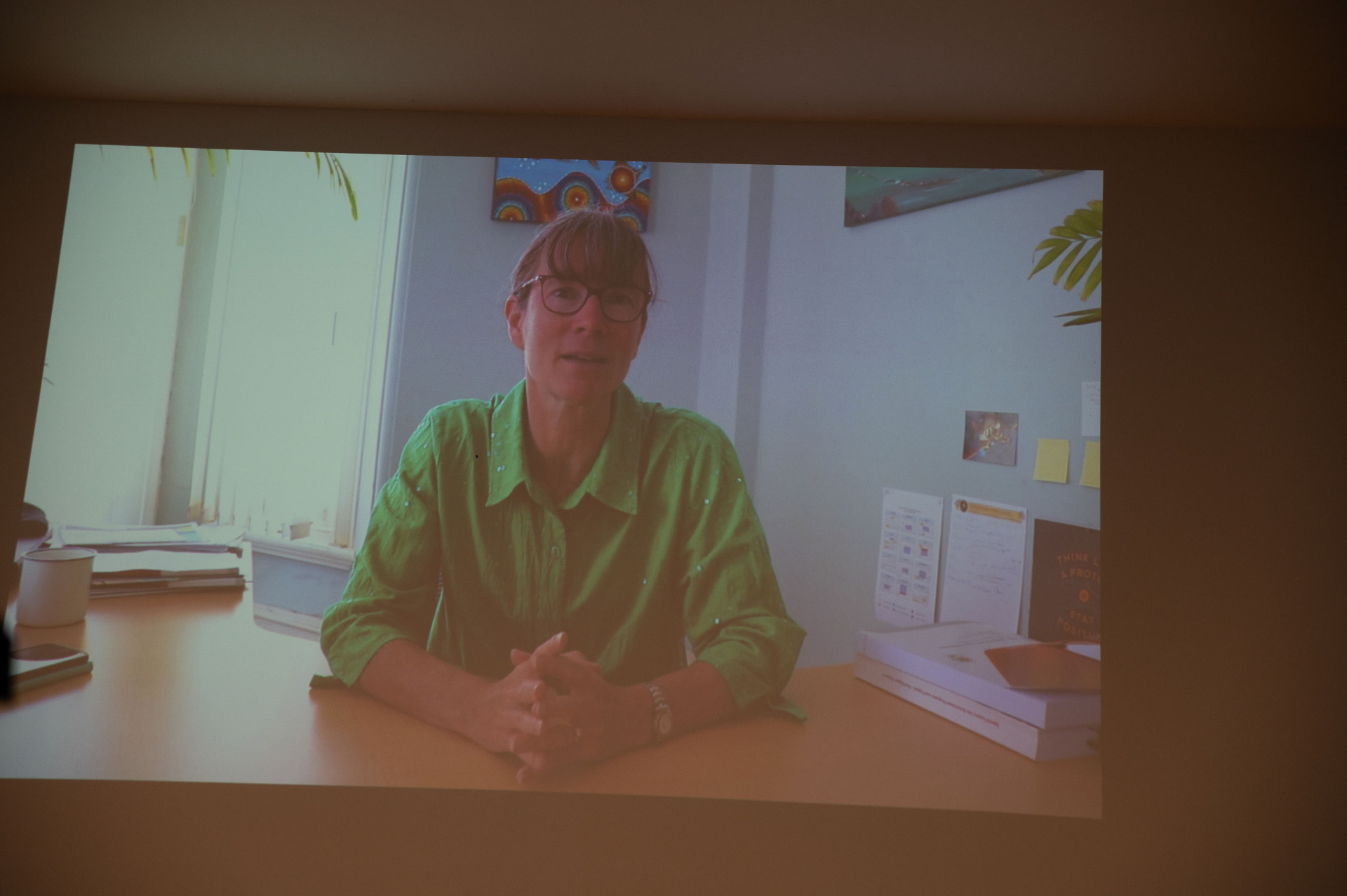 Diane Evers has been our MLC for the South West Region since 2017, following on from our previous representation in this region by Chrissy Sharp (1997-2005) and Paul Llewellyn (2005-09). She couldn’t attend this function but gave a short video presentation. Of course, a major, ongoing issue for this region is stopping of old growth logging. Diane is experiencing increasing public support for this and other environmental issues in the South West. She envisages a time of The Greens being in multiparty government (e.g. along the lines of what is now the case in the ACT).

Tim Clifford has been representing us in East Metro si 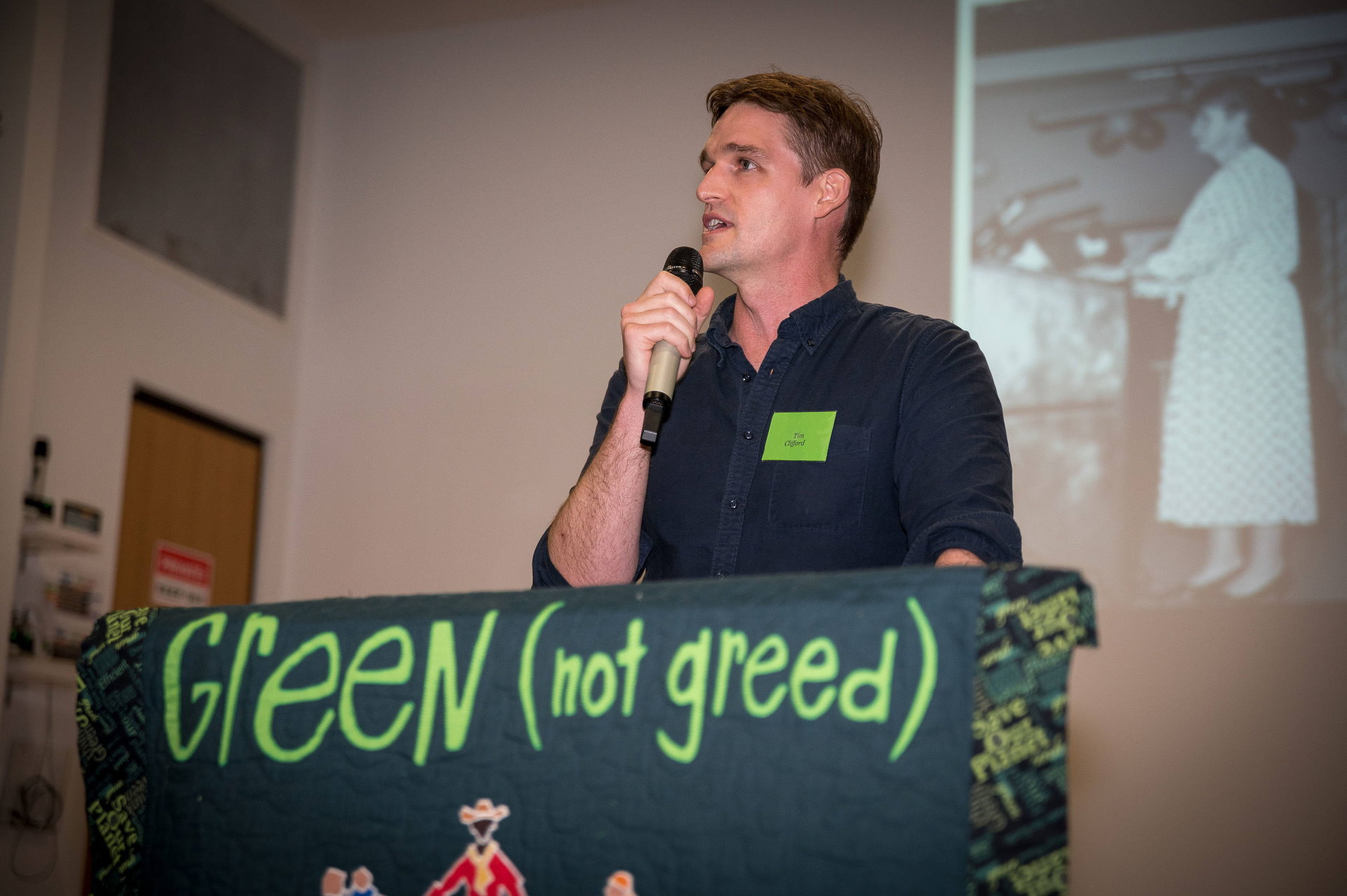 nce the last election, and he and colleagues are busy campaigning to make sure that he remains there after next March. Although his attempts to get realistic climate action recognized as a priority in parliament have so far not borne fruit, at least the case has been formally put and provides a focal point for further, intensified advocacy. He reiterated that we “show up” for all of the major issues of the day, initially out on our own but laying the foundations for greater public awareness. 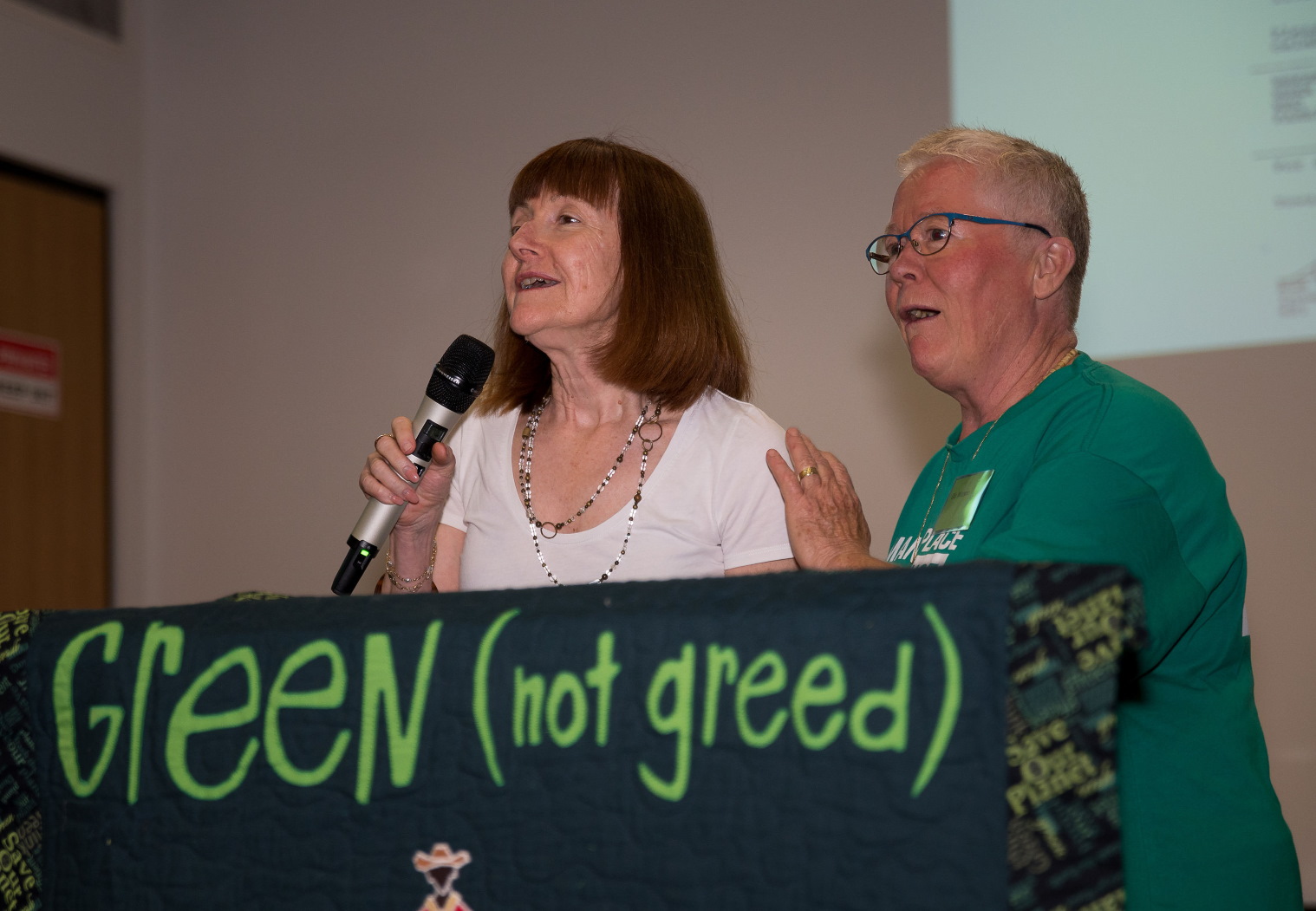 enator Rachel Siewert has been at her post since 2004 but will not be seeking re-election to the Senate. She explained that she sees her main role as trying to push other parties to do better in terms of improving public well-being, in which she has had some notable success. For example, her long-standing advocacy against Robodebt finally prevailed and she has for long highlighted the shaky ground on which the Cashless Welfare Card sits. Through her inputs into Senate Committees, and general advocacy of social welfare improvements, she attracts regular, usually positive, media attention. Those assembled expressed their deep gratitude for her achievements.

Senator Jordon Steele-John was full of hope for the f 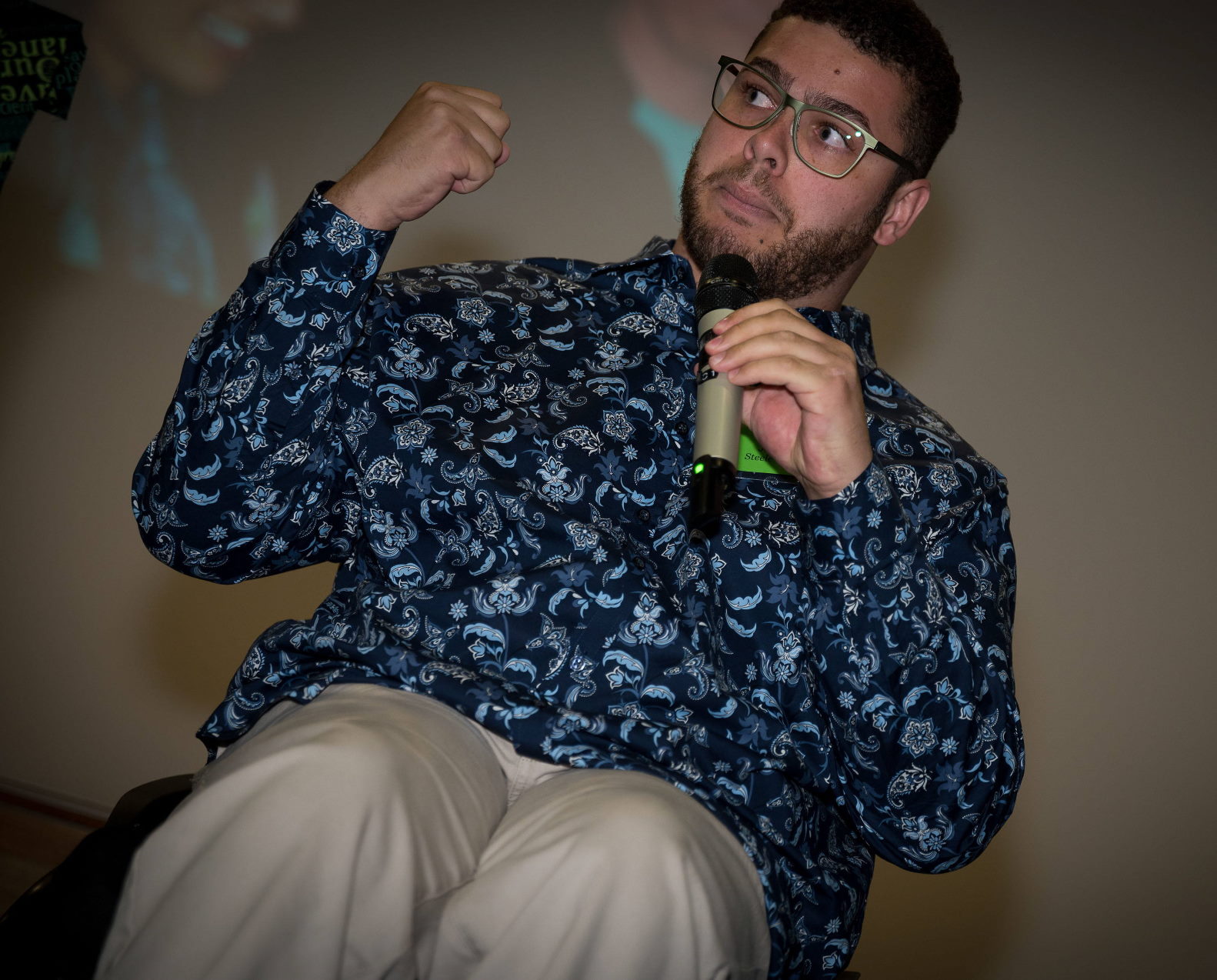 uture and what can be achieved. He observed that when we first confront an issue it seems that the odds are against us in being able to make any difference. Initially, we provide a voice of hope which acts as a rallying call for proper addressing of that issue. He expressed that we have indeed had lots of wins, at least in raising public consciousness if not always in nailing down satisfactory legislation. Jordon asserted that priority must be given to addressing the unfinished business of reconciling with the First Nations people from whom the land was stolen. 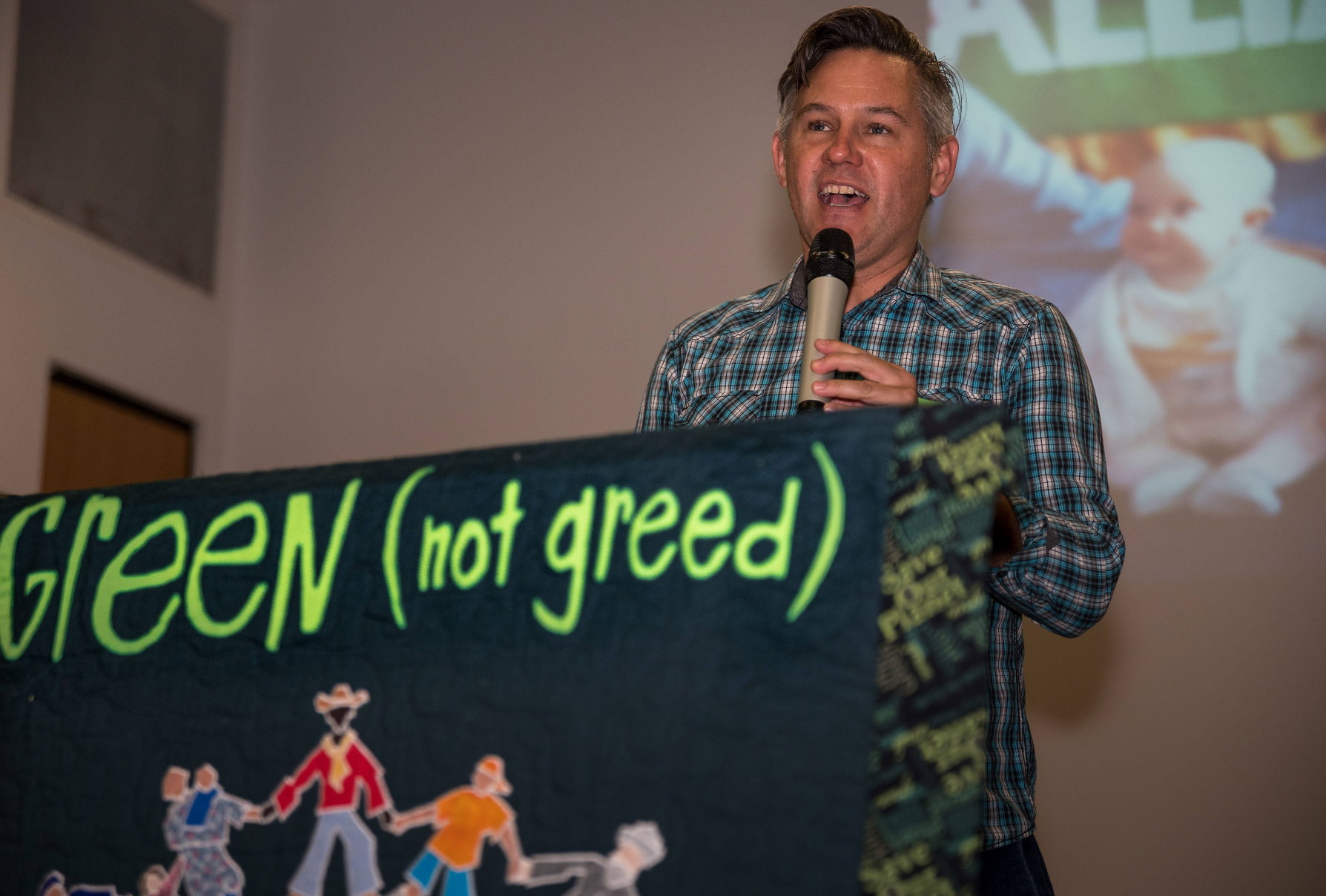 Brad Pettitt, Upper House candidate for South Metro, was optimistic of success in regaining a Greens seat here. He said that campaign teams in the region, formed around lower house electorates and their candidates, were off and running with intensive door knocking and phone banking efforts. From his experience of being Mayor of Fremantle he noted that Greens ideas may at first seem way out there, but that in the passage of time the world catches up, albeit too slowly mostly.

Many of the 40+ foundation members of Greens (WA) wer 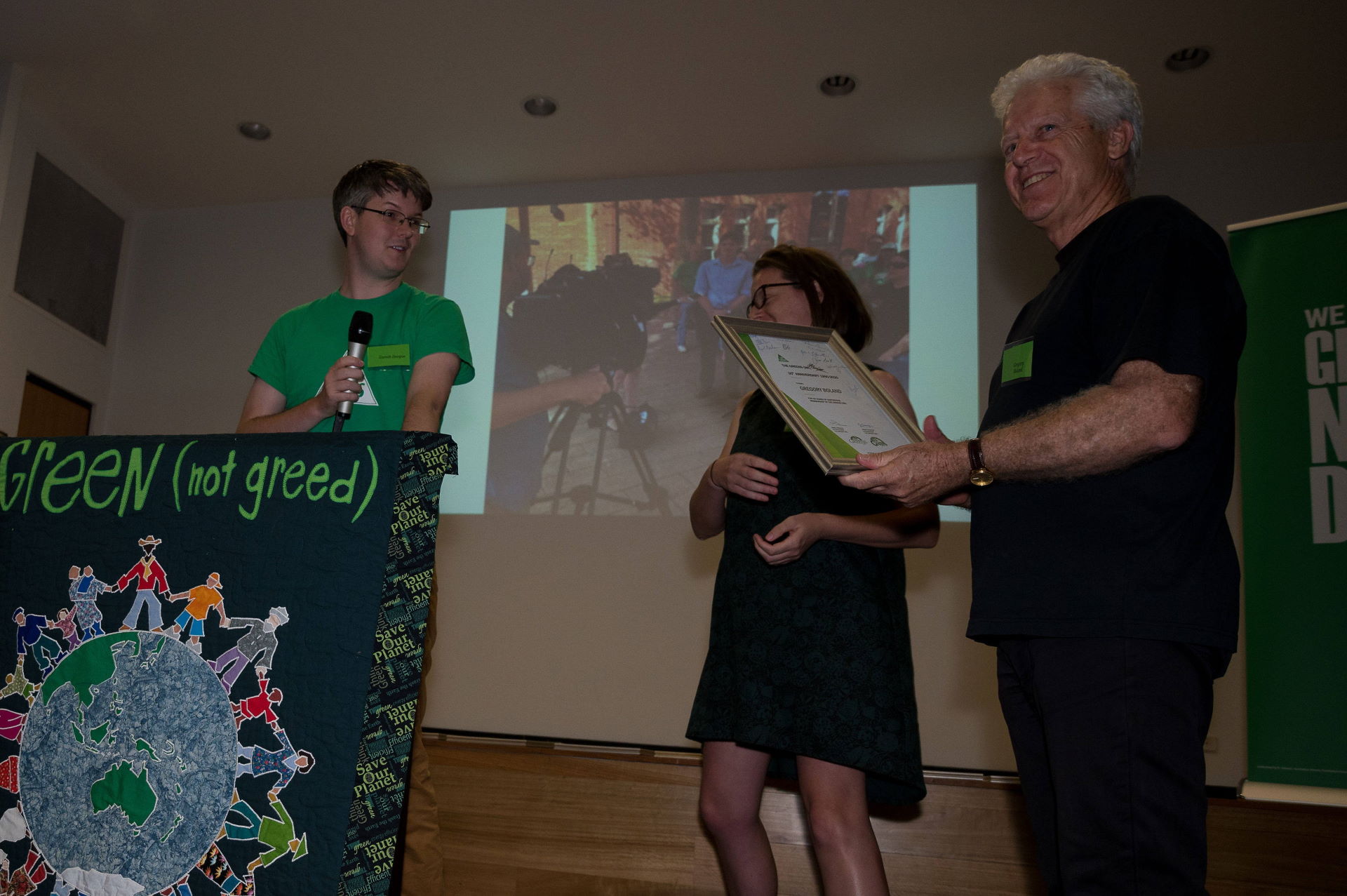 e present and were awarded certificates commemorating their founding moment, held in the Sunken Garden at the University of WA in 1990. 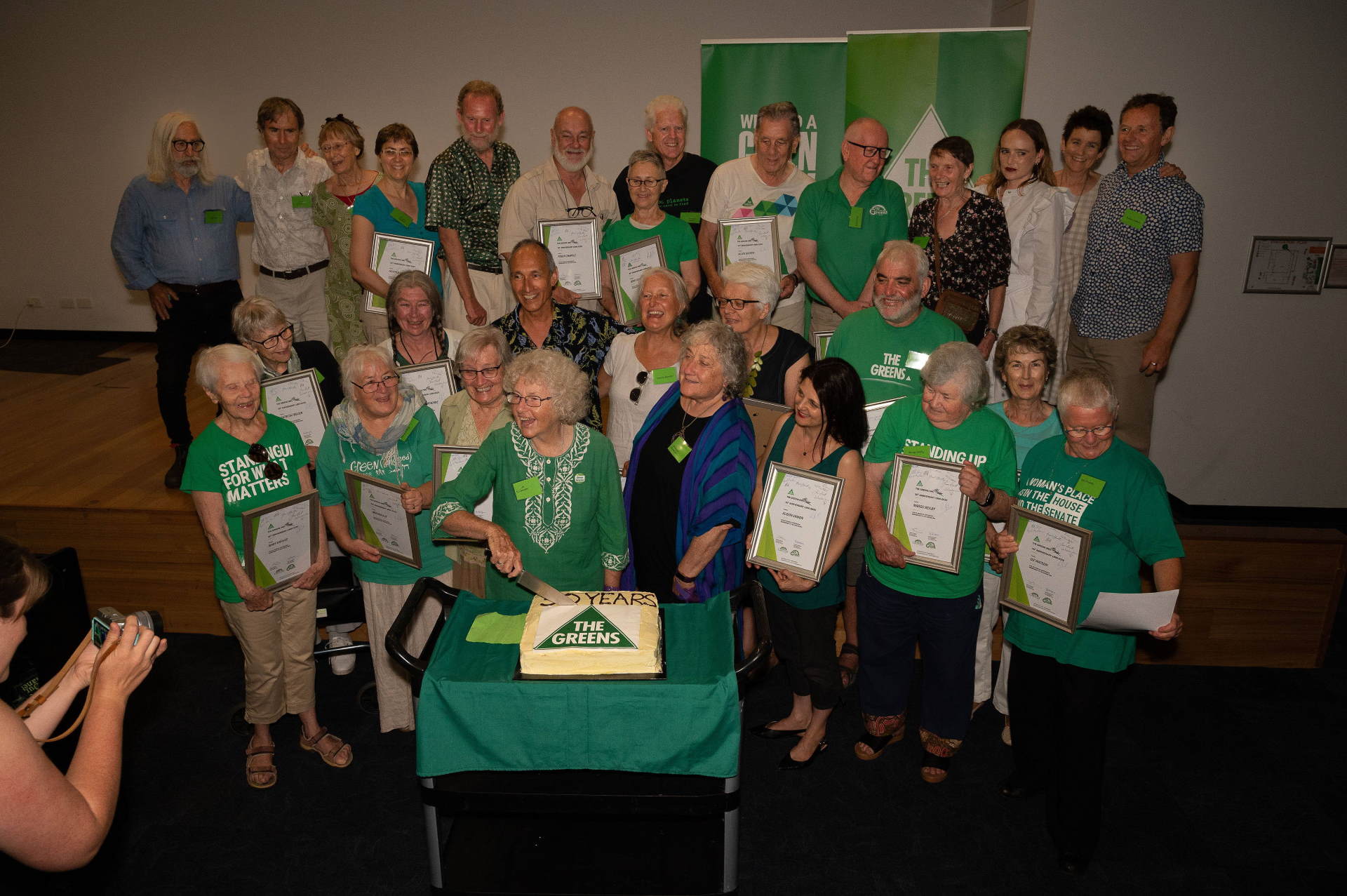 Then, candidates for the upcoming state election gathered on stage to indicate that we are indeed on the march. 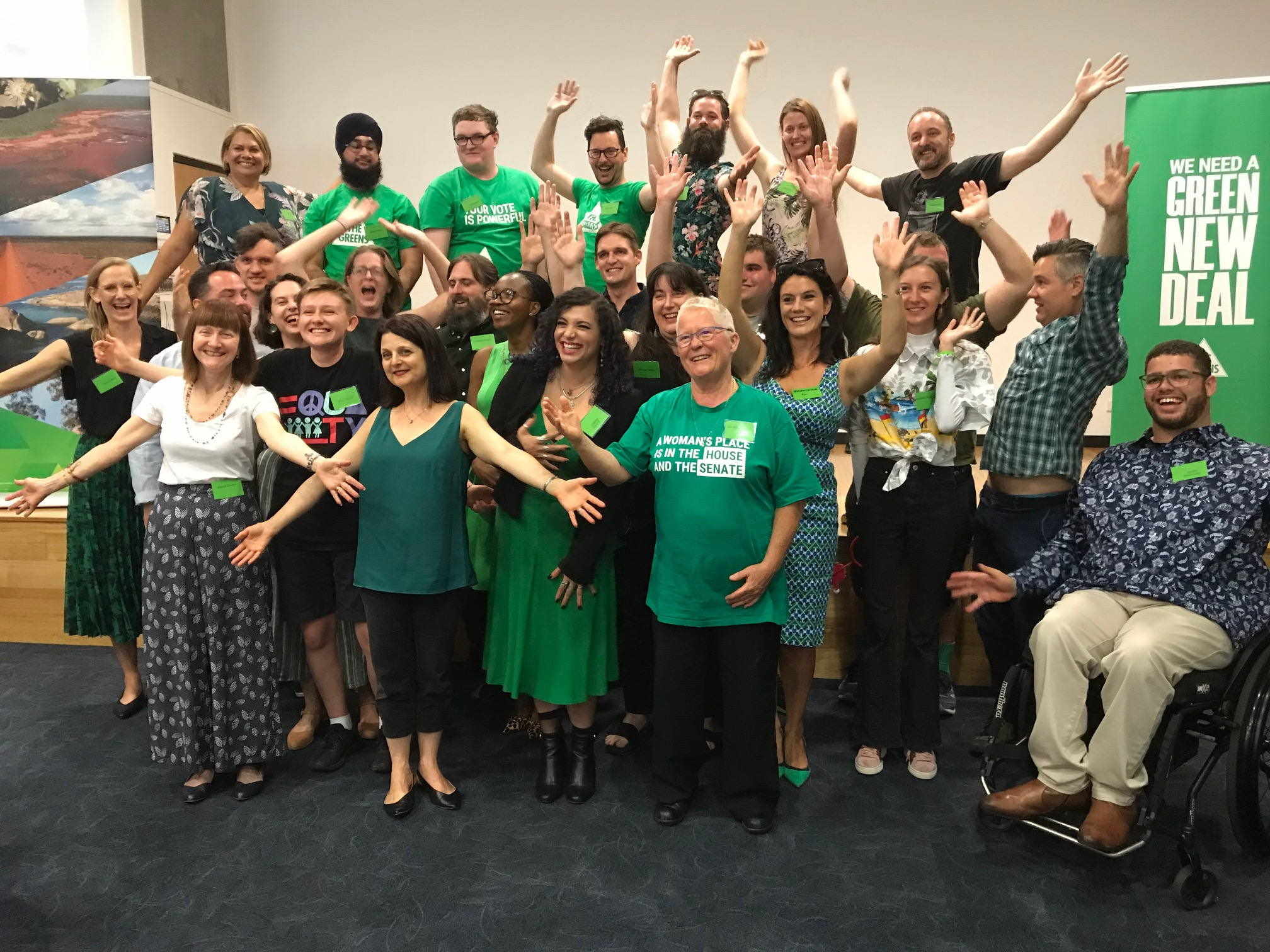 Photos: #MilesTweediePhotography (except the first and last text photo, by Chris Johansen)