The Dad, the Drama, the Day

Rob Delves reflects on his zigzag relationship to Anzac, from indifference through deep respect to much deeper unease

My wonderful father was a Liberal voter all his life and a soldier for over 30 years. He joined the Army in 1933 because he lost his job in a menswear shop and couldn’t find anything else in the Depression years. The Army offered important things that were in short supply in 1933: job security, reasonable pay, opportunities for skills training. He was told by everyone, especially older men who’d returned from the hell of 1914-1918: “you won’t do any fighting ‒ the last war was so devastating that we’ll never make that mistake again!”

After returning home after nearly six years of fighting, he stayed in the army, which was slightly odd as he wasn’t at all keen on war. He believed war only ever happened because of a massive failure of diplomacy. Starting from my early primary school years, he hammered me with two beliefs that were obviously deeply rooted in his experience of everything that went wrong from 1914 to 1945. First, violence solves nothing. You need to learn how to resolve your differences with others peacefully. He was opposed to private gun ownership and violent films. He and mum were totally opposed to parents hitting their children. My brother and I only drove them to respond with a slap twice – all things considered, this was a superhuman example of living up to one’s finest principles.

Second, racism is deeply destructive, it usually leads to violence, it’s a cancer that eats into the social harmony essential to a decent society. So you need to oppose it actively. Start by not making racist remarks to migrants and refugees but go much further than that and warmly welcome them. And don’t just ignore racist behaviour: let the person know you find it offensive. One of my fondest examples is around 1990, having lunch with Dad in company of friends, all like him about age 80. Several of them started complaining about the Vietnamese refugees living in their part of Melbourne: too many of them, don’t speak English, don’t fit in… the usual stuff. He politely but firmly disagreed, pointing out how entrepreneurial and hard-working they were, transforming declining high streets into thriving shopping precincts. Classic Liberal championing of small business free enterprise and anti-racism of the Fred Chaney and Malcolm Fraser variety. Dad wasn’t so comfortable with the post 1990s Liberal beast.

Although he refused to join the RSL, he did join the march every Anzac Day to remember those who died, especially those from his own battalion. Kept it very low-key. Basically he just wanted to put the war years far behind him, declaring “Never Again” to the violence, hatred, unfairness and racism of 1914-1945 and “Let’s Do Better” by creating a peaceful, egalitarian, prosperous, multicultural Australia.

Looking back, I can see that he was uncomfortable with much that surrounded Anzac. He didn’t want to talk about his war years and didn’t want me to join him on Anzac Day – went to the dawn service, the march, came home, what’s for lunch? Some of my university friends opposed the way that the Anzac Legend was being used to support Australia’s involvement in the Vietnam War. However, my anti-Vietnam pose was purely for personal survival reasons that disappeared when my number didn’t come up for the draft. A teenage life of deep political convictions and broad horizons! The whole Anzac thing was irrelevant to me.

That changed in 1969 and my first teaching job at a large high school in country Victoria. I’d describe many of the teachers who’d been there for a while as cautious, conservative, “straight”. Or so I thought until Anzac Day approached. The Staff Association passed a resolution requesting that the principal break with tradition and not hold an Anzac Day assembly. The boss, being an RSL traditionalist, was furious.

Confrontation ensued, the outcome of which was another resolution: “The staff agree to participate in the Anzac Assembly, but only to honour those who died in wars – if there is any talk of noble causes or praise of war, the staff will walk out.” They argued that resorting to war to solve conflicts in the nuclear age was unthinkable and yet here we were dragged into the war in Vietnam, and even conscripting young men to fight there, something we’d never done before.

The new teachers like me were impressed! We were mostly opposed to the Vietnam War, with varying degrees of passion. In fact differences of opinion between us and our parents’ generation about that war was a major reason why Anzac Day excesses made us uncomfortable, especially as we already had November 11th to honour our war dead and commit to peace.

The drama and passion of that experien 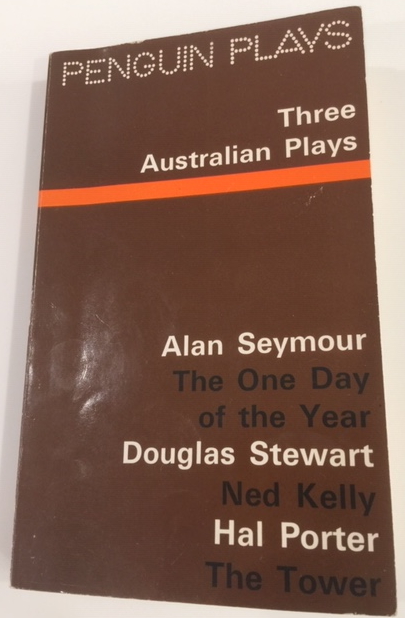 ce challenged my thinking, but an even more powerful drama arrived soon after. My year 11 class chose Youth Rebellion and the Generation Gap as the theme they wanted to explore and so I began looking for modern stories on that theme. A couple of teachers suggested One Day of the Year, written in 1959 by Alan Seymour. The play explores generation gap and class issues through the conflicts between Alf and his son Hughie over the meaning of Anzac Day.

The students loved acting out the passionate arguments, above all the heated exchange at the end of Act Two, when Alf comes home drunk and raving about his day of celebrations with all his old mates. Hughie responds by saying he is sick of this endless reliving of stupid wars.

Alf: You telling him (pointing to his close friend Wacka) everything he’s believed for forty years is wrong? You telling me what I’ve believed in is for nothin’?

(He makes a sudden dive at Hughie, drags him to his feet, but Hughie grabs him tightly and looks into his face)

Hughie: Believe in the men if you want to, they had guts.  But the day….it’s a mugs day.

Hughie: Why remember it? Why go on and on remembering it? Oh yeah, ‘that’s war, that’s war’ … Well, war’s such a dirty thing I’d have thought as soon as it’s over you’d want to forget it, be ashamed, as human beings, ashamed you ever had to take part.

Alf: Ashamed? Ashamed? To fight for your country?

In the 1960s and 1970s the play’s popular success, along with the growing anti-Vietnam War movement and young people’s disapproval of the way their parents’ generation glorified past wars, all contributed to questioning why Anzac Day is so precious. Public support for Anzac Day celebrations was slipping.

However, I hadn’t realised that until the 1960s, the very idea of questioning Anzac was considered taboo by many members of Australian society. On its release in 1960, the play caused uproar and was rejected, due to its anti-military stance, by the Adelaide Festival of Arts. Then, on Anzac Day 1961, during the dress rehearsal for its opening at Sydney's Palace Theatre, there was a bomb scare, forcing police to close the theatre for 24 hours. Seymour received death threats, was labelled a communist sympathiser and "un-Australian". He left for England, taking One Day with him. The play only received accolades and went on to become an Australian classic after it enjoyed long seasons in London and many other overseas cities.

I loved teaching the play and it changed my thinking. Initially I revelled in its relentless attack on the way Anzac Day was celebrated and the belief that a nation can only be born through the sacrificing its young in imperial wars. But later I began to be deeply moved by reading the play through the eyes of Alf and especially his older friend Wacka, who had fought in World War I. It’s in many ways a play about the awful things war does to soldiers and about respecting the way these people coped with the multiple horrors of 1914-45. It caused me to appreciate the resilience of my father and his generation and realise why they grasped so eagerly the opportunities of carving out a better world – at least those who weren’t too severely damaged by their experiences.

Recently I’ve reread the play and found out more about Alan Seymour. I’ve been pleasantly surprised to find out how he came to the same understanding:

Having set out to query the feverish and undignified celebrations of Anzac Day and their dangerous implications, I found myself facing something unexpected: I found myself liking, almost loving, the older generation, represented in the play…The sheer persistence of their long and scruffy … battle to cope with the overwhelming facts of the life of this century (war – depression – war) forced me to respect them.

In the last 30 or so years, Anzac Day and the Anzac Legend have regained their earlier status as Sacred Untouchables. I think my unease about Anzac Day and ‘the relentless militarisation of our history’ (Henry Reynolds) is shared by many Greens members. It’s also because the unquestioned sanctification of Anzac Day runs counter to what I believe is a central aim of education – teaching students to think critically. We are being taught a very one-dimensional, dishonest history of our involvement in wars and about Australian history more broadly. We are discouraged from critical thinking and questioning anything to do with the Anzac legend.

When the “Anzac Cloak” is applied to any topic, it suffocates any alternative argument. The Cloak is most powerful when used to justify decisions about going to war – it implies that anyone opposing that decision is un-Australian, or unpatriotic. Sometimes the use of the Cloak descends into absurdity. For example, Liberal for Canning, Andrew Hastie, sought to deride the state government’s recent Covid lockdown decision as pathetic by comparing it to the bravery of the Aussie soldiers when faced with extremely challenging situations in the WWI trenches. Imagine if they’d locked down and refused to fight!

We need to challenge this narrative that it is unpatriotic and shameful to question sacred Anzac. A mature nation, confident and comfortable with itself, should welcome thoughtful questioning of its history and traditions. Germany is a standout in this regard ‒ it has honestly faced up to the unspeakable evil in its history and built ‘Never Again” into its institutions and culture. We’re way behind them in our commitment to truth telling about our history.

I’d like to conclude with brief comments on two Anzac-related issues – very big issues indeed, so I’ll just pose them as questions.

1. Does the way we celebrate Anzac Day devalue the commitment to peace and non-violent conflict resolution that was the overwhelming response to their war experience of my Dad and tens of thousands of others?

2. Why is ‘Lest We Forget’ our response to those who suffered while defending our freedoms in faraway lands to support Britain and the USA, whereas the dismissive ‘Get Over It’ is our response to the First Nations people who suffered defending the land they’d lived on for thousands of years. Why aren’t they treated as patriots who heroically defended their homeland? Why aren’t they extended the same honour as those who died in overseas wars? In fact, shouldn’t the 100+ years of frontier conflict be seen as by far Australia’s most important war?