The classic drug dealers’ defence is: merely producing and/or selling a product in response to demand; what purchasers do with that drug and how it may affect them is not the dealer’s responsibility, or even concern; and in any case if we don’t provide, someone else will. The tobacco industry got away with this for a long time, until ever increasing public realisation of the dangers of smoking forced ever-higher taxes on tobacco, proliferation of no-smoking zones and health warnings on cigarette packets, usually in the form of rather off-putting photos of cancers.

The natural gas industry in WA, and in Australia generally, is at the stage the tobacco industry was at in the 1950’s and 60’s. That is, full government compliance in papering over the adverse consequences of consuming the product and therefore permitting and encouraging its unimpeded production and sale. And, it needs to be emphasised that the combustion of natural gas, along with other fossil fuels, presents a greater existential threat to humanity than tobacco, heroin or other such addictive drugs.

Over quite a few years now I have been making submissions to the WA Environmental Protection Authority (EPA) and assorted politicians, both personal and sponsored by various environmentalist groups, on the need to phase out gas due to its contributions to climate change. So far, these efforts have been to no avail. The feedback I have received on these submissions, from both politicians and, disappointingly, from the EPA, rather succinctly illustrates the ‘drug dealers’ defence’ being used. 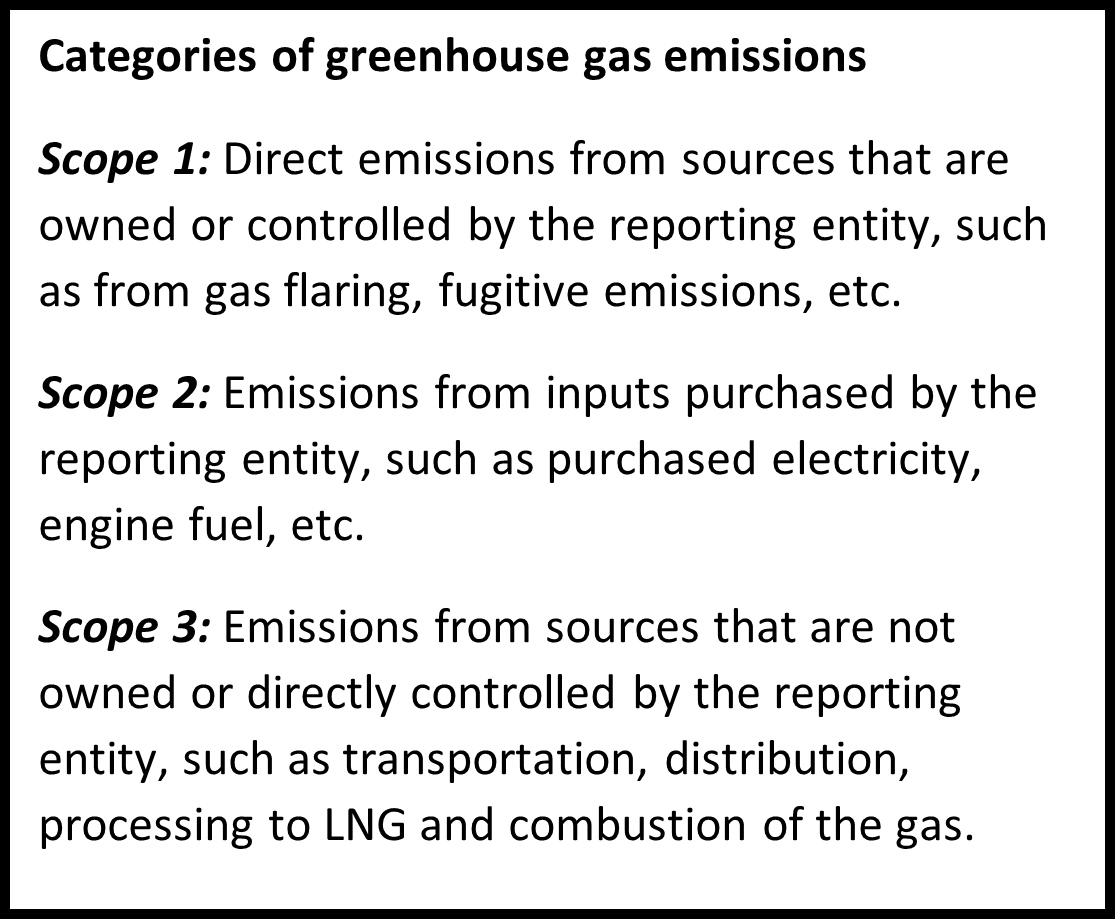 emissions it is necessary to understand the different types of greenhouse gas (GHG) emissions involved. This is where numbers games are played by gas proponents, in their attempts to demonstrate minimal environmental impact of their enterprise. Brief definitions of Scope 1, 2 and 3 emissions are given in the adjacent box.

Gas proponents argue that Scope 3 emissions are beyond their control and thus they are not accountable for them, following the classic drug dealers’ defence. They argue that emissions from the ultimate burning of gas, or of fugitive emissions during distribution, are accounted for in jurisdictions outside of theirs. It is asserted that if ultimate users are concerned about climate change then it is up to them to offset the resultant emissions. In reality, very few of such emissions are offset or are ever likely to be offset. How many retailers specifically offset the emissions from gas that they sell, or householders the gas that they burn?

Australia reports greenhouse gas emissions around 540 Mt CO2-e annually, which at about 1% of total annual global emissions, and this is considered by the Federal Government as hardly significant. However, this reporting only applies to Scope 1 and 2 emissions. If Scope 3 emissions are considered then the figure approaches 5% of the global total, which becomes significant especially when it is considered that Australia ranks with some oil and gas producing, low population middle eastern countries in terms of domestic emissions per capita. If projected expansion of fossil fuel extraction proceeds, which is seemingly encouraged certainly by the Federal Government and also by the WA Government, then it is estimated that Australia will be contributing between 11.9% and 17.4% of global emissions by 2030 (goodbye 2°C let alone 1.5°C). While Australia’s domestic GHG emissions (i.e. Scopes 1 and2) trend has levelled out over the previous 5 years, WA’s emissions are markedly on the increase, attributable to the expanding LNG industry.

The atmosphere doesn’t differentiate from which jurisdiction on the planet GHG emissions came. It only sees total global emissions added. Thus for a gas producing entity to disown any responsibility to GHG contributions to the atmosphere of the gas they extract, whether used internally or exported, is simply disingenuous.

A particularly difficult factor to nail down is fugitive emissions of methane. This includes losses from the well, from pipes, in processing, during distribution, and even when you do not properly close the tap of your gas cooker. These emissions are difficult to quantify as they are difficult to measure and can be intermittent. Gas leaks from wells alone have been recorded at 1-9% of total methane extracted. In the USA, an independent assessment of methane fugitive emissions from the oil and natural gas supply chain produced radiative forcing over a 20-year time horizon comparable to the CO2 from natural gas combustion (when methane is burnt it is converted to CO2). In WA at least gas producers are only required to give their own estimate of potential fugitive emissions and once operational only self-report fugitive emissions, with no independent auditing.

In reporting, gas producers and government use the conversion factor of methane being a 25-28 more potent GHG than CO2. This is derived from the figure used decades ago by climate scientists when they were considering climate change effects over a 100 year time scale. There is now realization among climate scientists that the next 20 years is the critical period which will decide whether or not we tip over into catastrophic climate change, and we should be using the conversion factor of 84 applicable for this period. Actually, recent calculations put it closer to 100 times more potent than CO2 over 20 years, and if a 10-year time scale is chosen then it is much higher. In my submissions I have been unsuccessful in conveying this information. Nevertheless, using 25-28% still makes it rather potent stuff compared to CO2.

The WA Government released its climate policy in November last year and the Liberals their election platform indicating promotion of renewable energy on 11th February. Although both statements indicate some desirable initiatives, like phasing out of Collie coal, promotion of renewable hydrogen, charging infrastructure for electric vehicles, etc., they failed to address the elephant in the room – gas. There were aspirational statements about the state aiming for net zero emissions by 2050 (Labor) or net zero emission by government entities only by 2030 (Liberals) but no pathway outlined of how to get there, suggesting that only lip service is being paid to “climate change”.

It is apparent that the WA Government is resorting to greenwashing when it comes to action on global warming as they are placing no impediments to North West Shelf LNG operations, they have overturned the moratorium on fracking on large tracts of land and they are permitting the expansion of conventional gas wells in the mid-west. Anyone half-way conversant with climate change would know that, if the planet is to stay within the critical limit (to avoid irreversible catastrophic consequences of climate change) of 1.5°C above pre-industrial mean global temperature then opening up any new fossil fuel sources is not possible. Indeed, reductions in fossil fuel burning of the order of 6% per annum are required.

Prevailing political arguments are that if we don’t provide fossil fuels to global markets then other exporters will – back to the classic drug dealers’ defence and an abdication of any responsibility for global warming. Another argument is that export of gas contributes to emissions reduction as it replaces coal, which has a higher CO2 emissions factor. Firstly, no evidence is produced that imported LNG is replacing coal in importing countries. Secondly, life cycle emissions of gas, especially via LNG and when fugitive emissions are realistically accounted and a realistic global warming potential conversion factor is used, come out similar to those of coal.

It is clear that both the Labor and Liberal Parties, in WA at least, recognize that that the electorate wants action on climate change, so why are they so obviously reluctant to tackle the main emissions culprit? One reason would appear to be the royalties and taxes to be obtained from gas industry operations. However, royalty payments have been deferred for many years hence as gas developers are allowed to deduct their establishment costs. More taxpayer money has been used to facilitate establishment of the LNG industry than has so far been received from it. LNG importing countries in East Asia (mainly China, Japan, Korea) are showing increasing interest in converting to renewable energy. This raises the prospect of stranded assets, of which the taxpayer will have to pay for their clean-up (although I understand that abandoned marine drilling rigs encourage colonization of marine life and thus might improve fishing prospects!).

So, why are our political leaders still so keen on protecting and promoting gas, even if it is not contributing to government coffers? Well, simple really, for the reasons that the tobacco industry could prevent government interference in their business for so long (see Naomi Oreskes and Erik Conway’s “Merchants of Doubt”). Namely, intensive direct lobbying, political donations and the revolving door between politics and industry, as recently comprehensively documented in “Captured State - The influence of the gas lobby on WA” recently published by 350 Boorloo Perth.

The above does present a depressing picture for the future. But it need not be. With its immense sun and wind resources WA has the potential to become a global renewable energy superpower, not only in meeting its own energy needs but also in exporting renewable energy (hydrogen via ammonia, HVDC cables). Such opportunities are frequently reported in the media and are not elaborated here. And when a longer term view is taken, a phase-out of the existing gas industry looks increasingly rational, not only in terms of climate change abatement but in avoiding stranded assets. Those assets could be repurposed for renewable hydrogen production and export.