But the real crime is what is happening in the forests

WA Forest Alliance recently exposed two major scandals in the native forest logging industry and the Minister for Forestry, Hon. Dave Kelly MLA, responded by saying that the subsequent cancellation of a contract shows that “the system is working”. Unfortunately, the Minister’s optimism is ill-founded, and the scandals WAFA exposed are just the tip of the iceberg in a sector that has become accustomed to an extraordinary lack of regulation.

Early in 2019, we were contacted with information that Nannup Timber Processing (NTP), the second largest native forest sawmill in the South West, was sending workers home and secretly packing thousands of tonnes of marri and jarrah logs into sea containers for export.

Under the terms of their contracts with the Forest Products Commission (FPC), native forest sawmills are required to process logs locally. Any on-selling of whole logs without permission from the FPC is a breach of contract and can result in the contract being terminated.

While we were researching and gathering evidence, we were contacted by separate sources with information that Auswest Timbers, WA’s largest native forest sawmill, was busy chopping first grade jarrah sawlogs into blocks and selling them to Simcoa to be used as charcoal in the silicon smelting process.

People were coming to us and asking us to do what the industry was refusing to do, and expose the rort in these big sawmills and the disgraceful favouritism and lack of regulation by the FPC, and hopefully by shining some sunlight on it, bring about some change.

There are times in a campaign when you are so heartened by the courage and determination of your team, you feel that anything is possible and that action is truly the antidote to despair. This was one of those times, with people hiding in the bush with long lenses, following trucks and documenting and analysing what they found. As the evidence came together it was clear we had a major scandal to bring to light.

In November 2019, following a formal investigation, it was found that NTP had indeed been exporting marri logs in breach of its contract and as a result its marri contract was terminated. It became clear that the FPC had chosen not to have the apparent export of jarrah logs investigated and this caused significant frustration and a strong reaction on social media where hundreds of people on the ABC’s facebook page called for a complete end to native forest logging. The FPC then announced it would extend the investigation and inquire into the export of jarrah logs.  The results are yet to be released.

In the meantime, Parkside Timber, a Queensland company, has come to WA and bought NTP and Auswest. Lucky timing for NTP because rather than also losing its jarrah contract and being left with stranded assets, it seems it has got off scot-free.

If you ask supporters of the logging industry why logging of publicly-owned karri and jarrah forests continues, the response will invariably hinge on the claim that it generates necessary employment in towns where it is most needed, and that it produces high value timber for West Australians. This is supposed to balance the losses in the forests.

This explains why many people, including within the industry, were so outraged to hear of the secret exports by NTP and the huge waste of high value jarrah sawlogs at Auswest. It adds insult to injury when the wood coming from much-loved and irreplaceable forests is not even being used locally, just lining the pockets of a couple of fat cats at the top of the pile.

Really though, the much greater crime is what is happening in the forests, not at the sawmills. Native forest logging is the only industry in Australia that has major impacts on matters of national environmental significance but enjoys a special exemption from the environment impact assessment provisions of the Federal environment laws. We also have no State laws in WA that require habitat for endangered wildlife to be protected in logging operations.

Logging routinely destroys critical habitat for endangered wildlife including nesting hollows for Black Cockatoos. A recent complaint to the Conservation and Parks Commission regarding a particularly bad case of habitat destruction was dismissed on the basis that it ‘wasn’t a breach of guidelines.’ 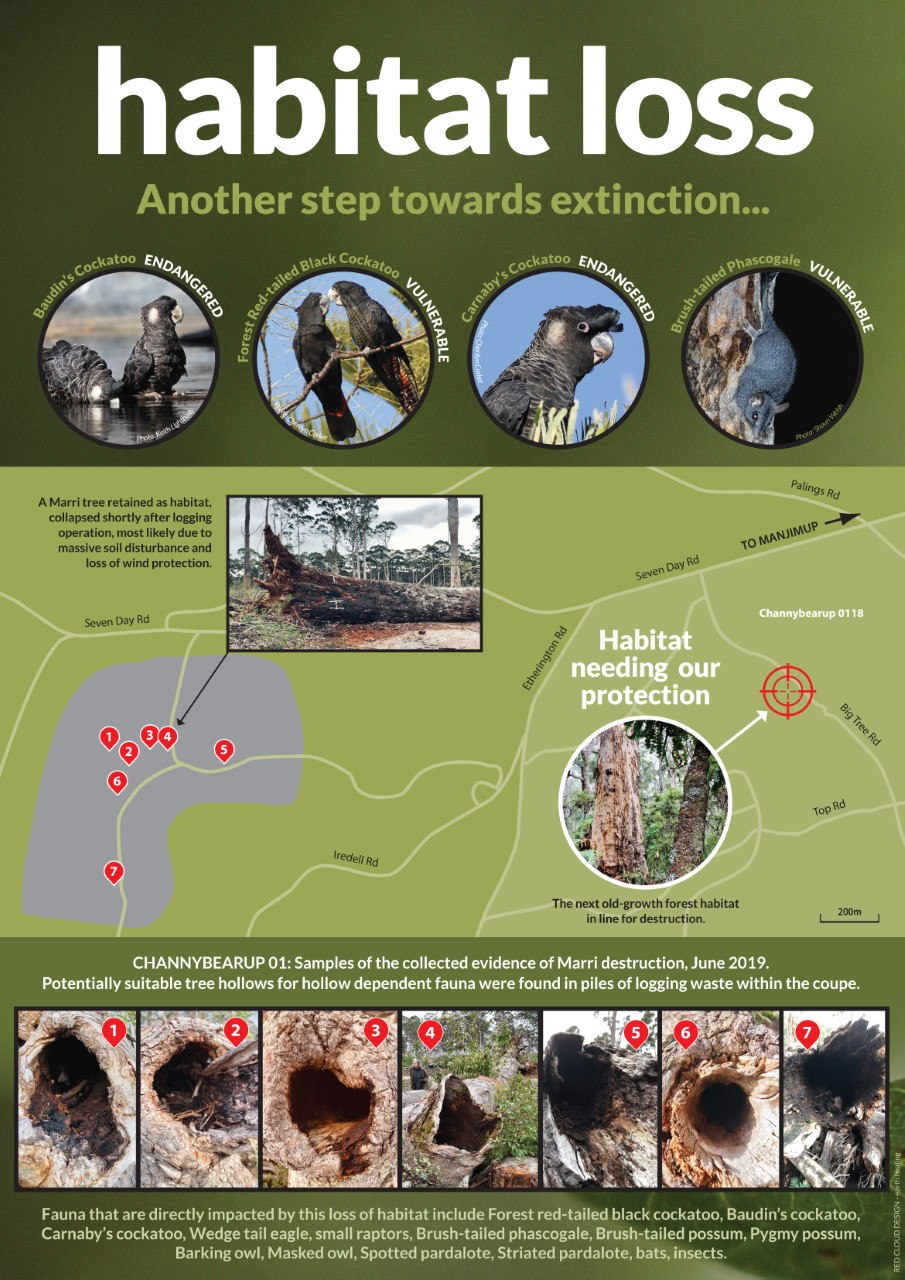 So when the Minister says “the system is working” he misses the point. It was a community group and individuals, not the relevant government authorities, who exposed the rort in Nannup and at Auswest. People are commonly threatened, arrested and fined for standing up for the forests, and we have no laws, State or Federal, to help us protect them. On the rare occasion that we are able to pin a company to the wall, even temporarily, or expose major breaches of logging contracts and guidelines, those responsible never suffer penalties commensurate with the suffering they’ve inflicted on the forests, wildlife, climate or communities. The system is not working, it is fundamentally broken.