Have you noticed we’ve been asking for donations more than usual over the past months? It’s because we can’t compete with the old parties without donations from people like you. But we’ve also got something they don’t.

Hello! Have you noticed we’ve been asking for donations more than usual over the past months?

In case it feels a bit like the Bernie meme (“I am once again…”) I wanted to write and tell you we’ve been asking for your support because we’re trying to build the war chest we’ll need going into the next election - which could be as soon as October this year.

You see the truth is, without donations from individuals like you, we can’t compete with the old parties. Not any more, when they’re coming at us with cashed-up billionaires and the entire force of the Murdoch media. As you know, we’re the only party who don’t take money from big corporations or the fossil fuel industry. So we’ll need to raise money our way - the grassroots movement way, entirely supported by people like you and me.

People who care enough to put their money where their mouth is.

I wanted to have this conversation with you today because this week we’re launching our first major fundraising appeal for the federal election. In the appeal, Adam will explain why we’re getting started so early. Why we’re launching our election plan now. And why we believe we’re preparing for the biggest election battle of our 29-year history.

We know that no matter how much we plan and prepare, the old parties are going to outspend us. But we’ve got something they don’t:

Another thing I really wanted to say today is this: If you had a hard year last year, or you’re not in a position to give, please just ignore our requests.

The last thing we want to do is place the burden of responsibility on those who are already shouldering it. Let us know if you want to stop receiving our emails, and we’ll stop sending them. There are lots of other ways you can support our campaign (like with your voice!).

For everyone who can dig a little deeper than usual, thank you. As you fire up the fight for the next election, you’re starting something with the power to change everything.

We’re so glad you’re with us.

You might remember when the Australian Electoral Commission (AEC) finally released donations disclosures from just after the 2019 election. We knew it would be bad, but the list of dirty donations was still pretty shocking. Here are the top donors: 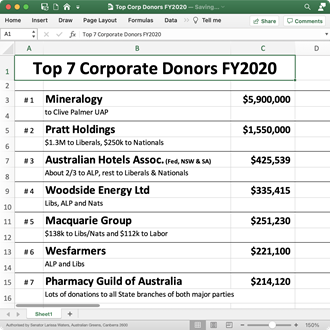 All up, it looks like the major parties raked in around $150 million in donations during the last financial year (and it wasn’t even an election year!). Plus there are reports of $100 million in ‘dark money’ where we don’t even know the source!

Only donations over $14,000 had to be declared, so we may never know the full extent of donations or where a third of those donations actually come from. But what we do know is:

Getting dirty money out of democracy

We’ve been campaigning for decades to clean up politics - calling for a federal corruption watchdog, demanding we close the revolving door between politicians and industry, and trying to strengthen whistleblower protections.

Fixing political donations laws is a cornerstone of this work. We’ve been pushing for a total ban on corporate donations from dirty industries like mining and gambling, and to lower the donations threshold to $1,000. Of course, with billions of dollars flowing into major parties coffers over the last 20 years they’re not keen on any change to the status quo.

That’s why we know we’re going to be a bigger target this election. They’ve got a billion reasons to keep us from winning back the balance of power, and so it’s going to be rough seas for a while.

We’ll need every one of us doing our bit to fight their corruption and lies with our message of transparency and truth.

Whenever someone like you makes a donation to the Greens, it’s vetted by Donation Reference Groups in each state, and all contributions over $1,500 are listed on our website.

Our donation policy clearly states that the Greens “...ensure that the values and aspirations of all donors are not inconsistent with those encapsulated in the policies and the Charter of the Australian Greens”. You can read that full donation policy online too. We stand by this not just because it’s the right thing to do, but because we won’t ever put ourselves in a position where we could be seen to be compromising our fight for political favours.

Want to donate now, to take back our democracy and our future? HECK YEAH YOU CAN. Click the button below and you’ll go through to our campaign page. Let’s get started!

Fire up the campaign

« Back to March issue