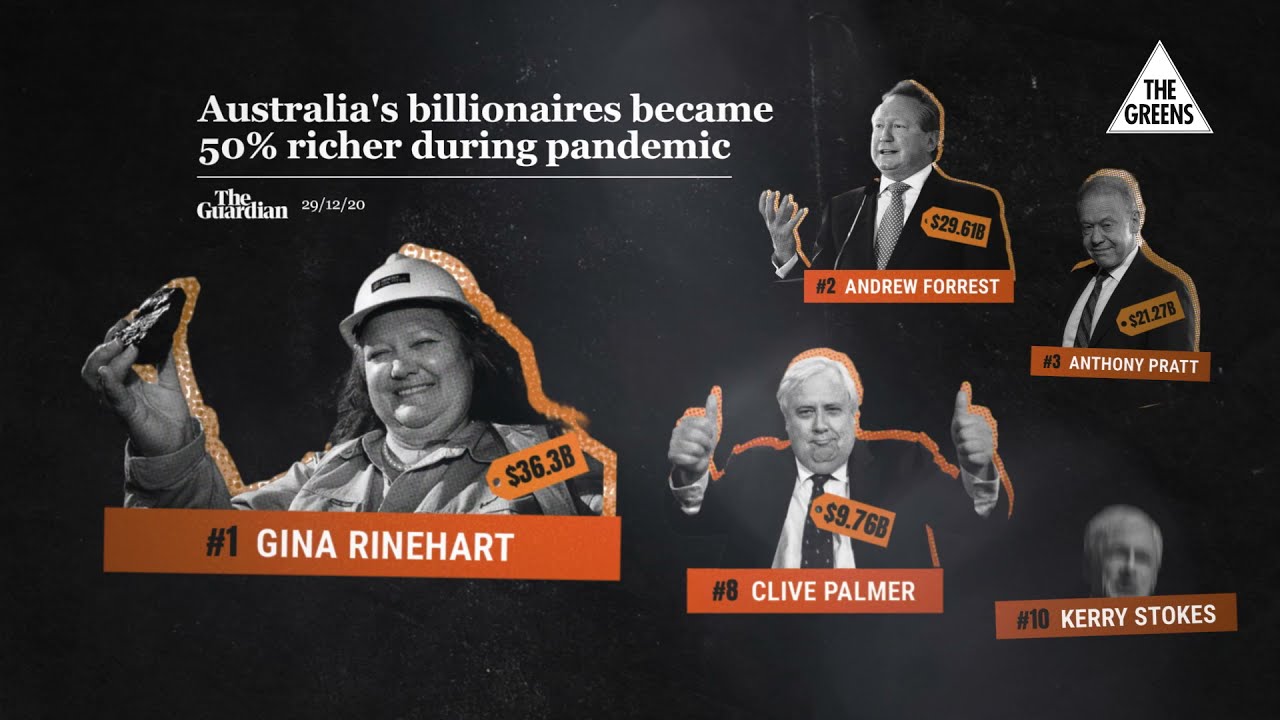 Or was it more homeschooling, zoom meetings, doom scrolling, and watching your savings dwindle? 💸

Well while your year was tough, billionaires in Australia did better than billionaires anywhere else in the world. 💰💰💰 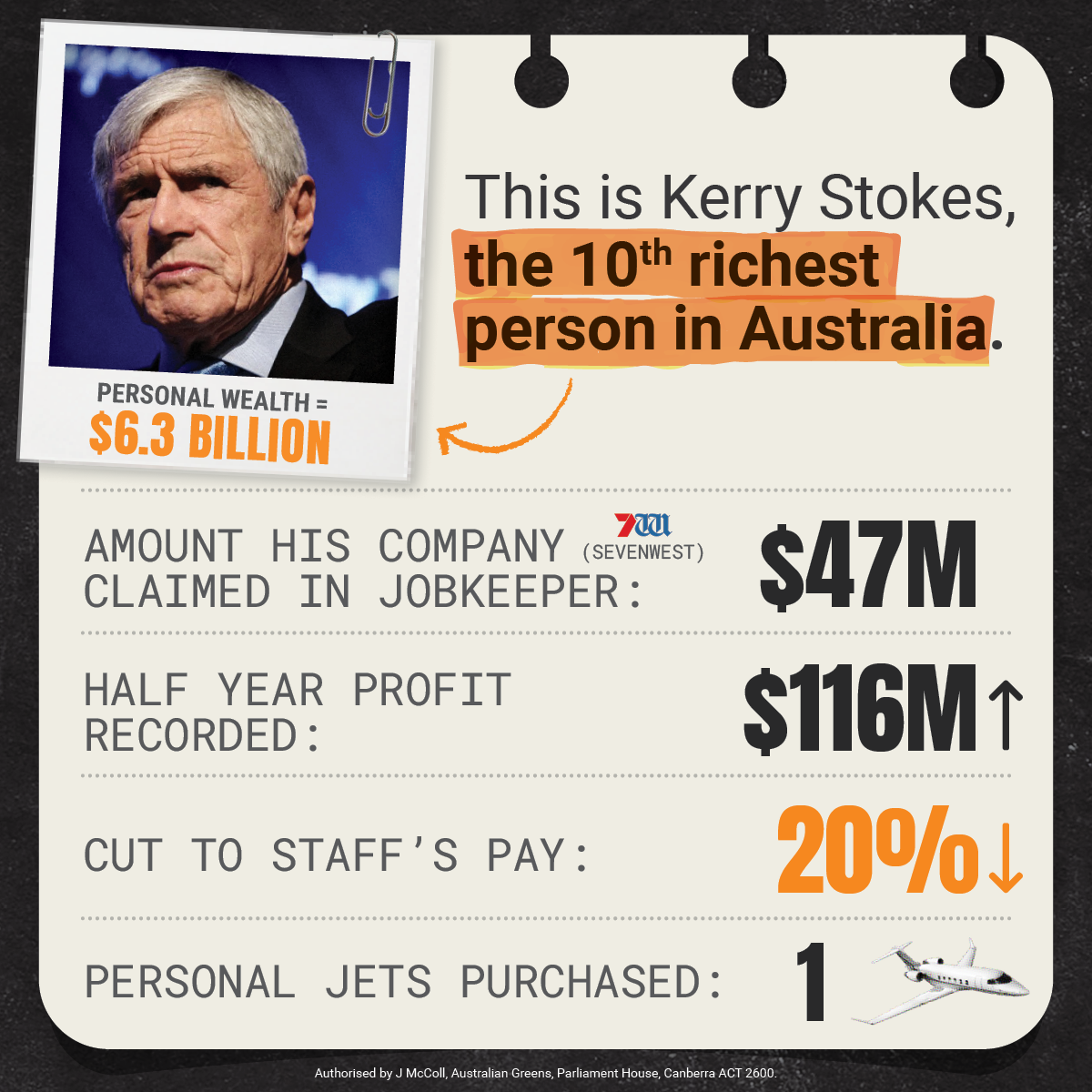 During the pandemic, billionaire Kerry Stokes made over $570 million. His companies took millions in corporate welfare like JobKeeper, and cut workers’ wages. Meanwhile, Stokes bought a new jet.

At the same time millions of people lost their jobs. More women lost jobs than men, and did more unpaid work. A third of young people went jobless.

The billionaires made how much?!?! 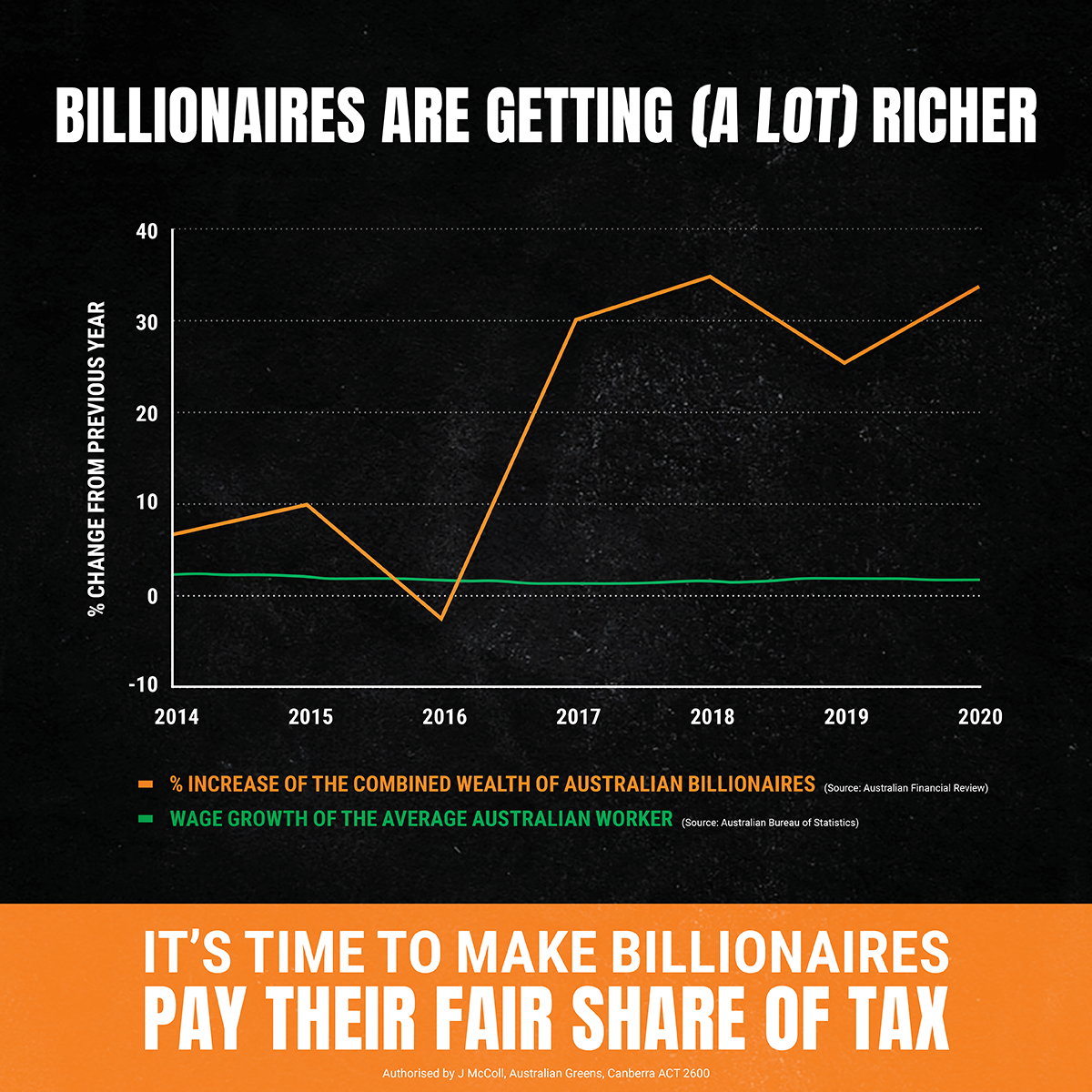 Australia’s billionaires did very well out of the pandemic, increasing their total wealth by 34%.

Corporations got welfare, while women
and young people lost their jobs

During the pandemic, the government paid over a billion dollars in JobKeeper to the biggest, and most profitable companies. These companies paid over $24.7M in bonuses to their executives. 1 in 3 big corporations paid no tax.

The Greens will make billionaires and big corporations pay their fair share.

How does does the billionaire tax work?

A 6% Billionaire’s Tax would only apply to the net wealth held by Australia’s billionaires. To stop the billionaires shifting assets offshore, the tax would still apply to 90% of their original wealth. This tax on just 122 Australian citizens would raise approximately $40 billion over the medium term to pay for the services and jobs that Australian’s need.

6% of Australia’s billionaires’ wealth is a fair share for Australia, but generally, much less than the growth of biggest billionaires during the pandemic. For example, Australia’s richest person Gina Rinehart’s wealth has increased by 123% to $36.28BN, 6% of her wealth is $2.2BN. Billionaire coal miner Clive Palmer more than doubled his wealth to $9.76BN. Six per cent of his wealth is $586 million.

The Billionaires Tax, the Super-Profits Tax, and ending corporate welfare and handouts, will help fund genuinely free public schools, dental into Medicare, and a job for everyone who wants one.

We have a plan to Fight for the Future and we need you to read it and share it with your friends and family if you want to see it become a reality.

Next: Fight for the Future

We can tackle the climate crisis and economic inequality, and create a better life for all.