Everyone deserves access to a transport system that is affordable, reliable and accessible.

For far too long, transport planning across our state has been dominated by profit-hungry toll road companies and unimaginative politicians.

​​​Huong Truong, Greens MP for the West, has a plan for more public transport, allowing people to leave their cars at home, spend less time commuting and more time with friends and family. 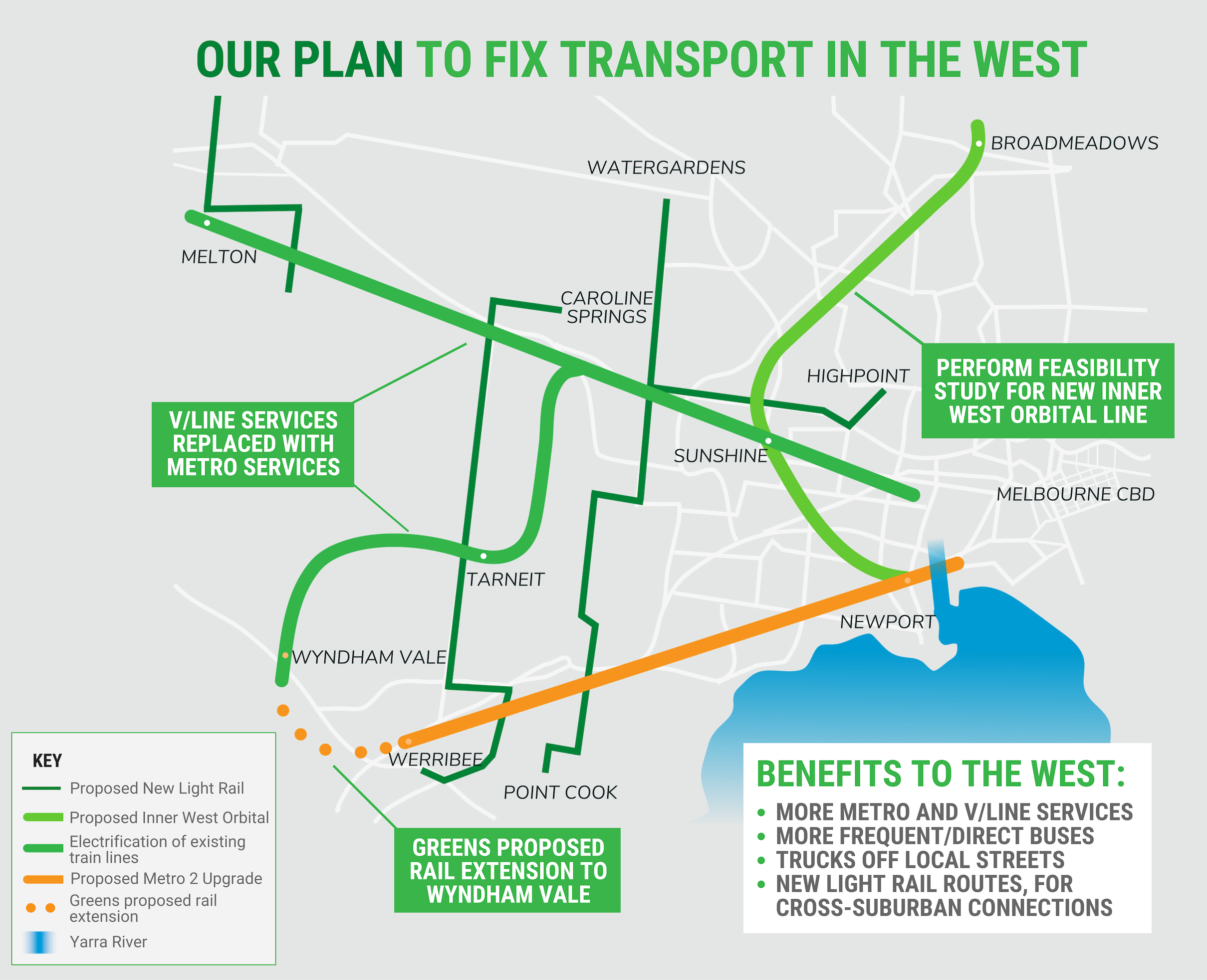 Start planning for a second Metro Tunnel now. Melbourne Metro 2 will connect Newport to Fishermans Bend and Clifton Hill, extend the Werribee Line to Wyndham Vale, and could quadruple services on the Werribee Line. It will help turn our train network into an interconnected web, like the London tube or the New York subway, instead of a radial system. 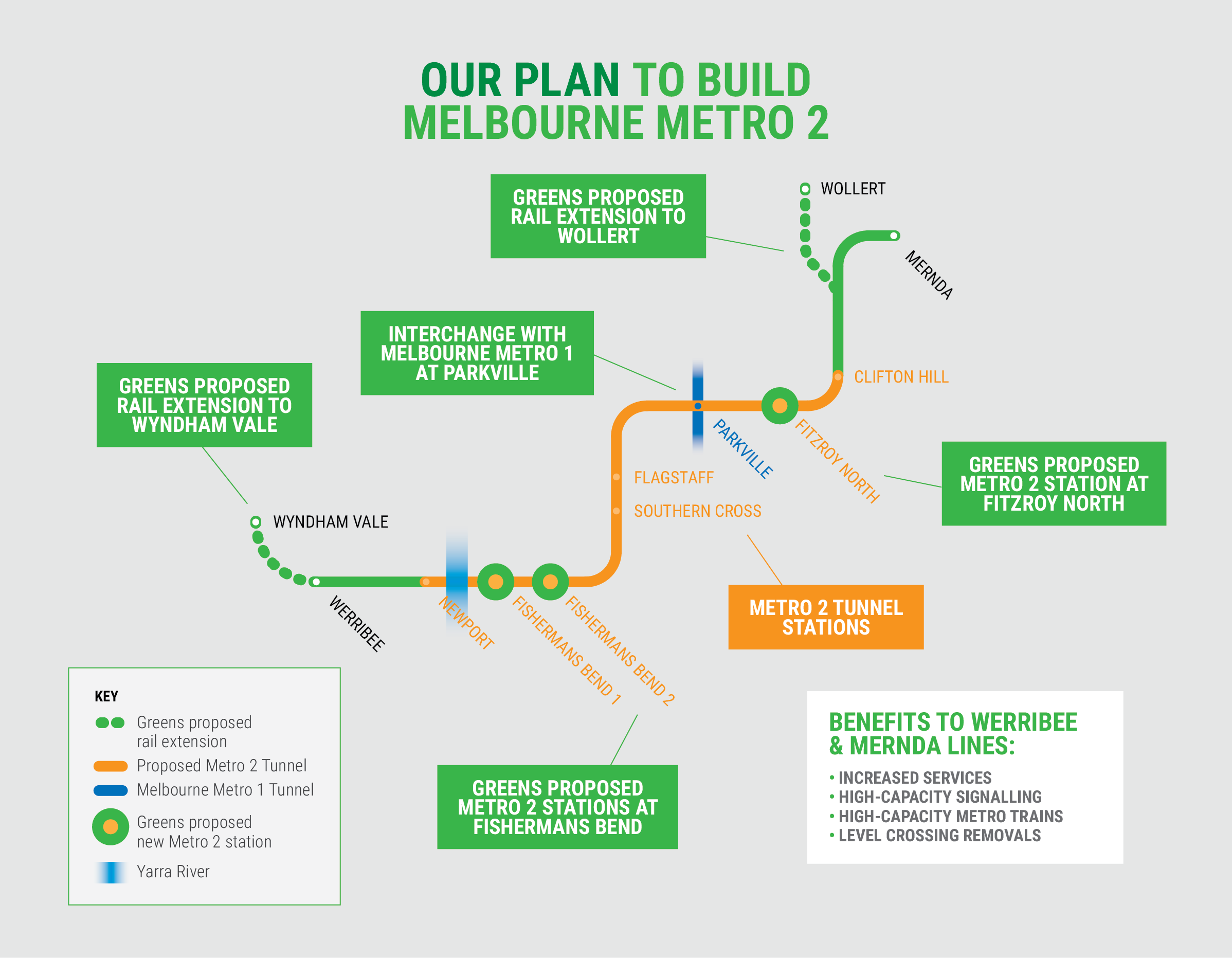 Do a feasibility study for a new Inner Western Orbital passenger line along the existing freight corridor from Newport to Sunshine and Broadmeadows, which services new mega-developments at the Bradmill site in Yarraville and Precinct 15 in Altona North, and the National Employment and Innovation Cluster at Sunshine.

Do a feasibility study for new light rail routes for cross-suburban connections - to connect Deer Park to Highpoint, Melton to Toolern, Point Cook to Watergardens and Hoppers Crossing and Werribee Plaza past Tarneit Station to Rockbank

The Greens have been fighting to get trucks off residential streets for decades. Our smart, long-term solutions will get it done sooner than the West Gate Tunnel would.

Our plan for getting trucks off residential streets. 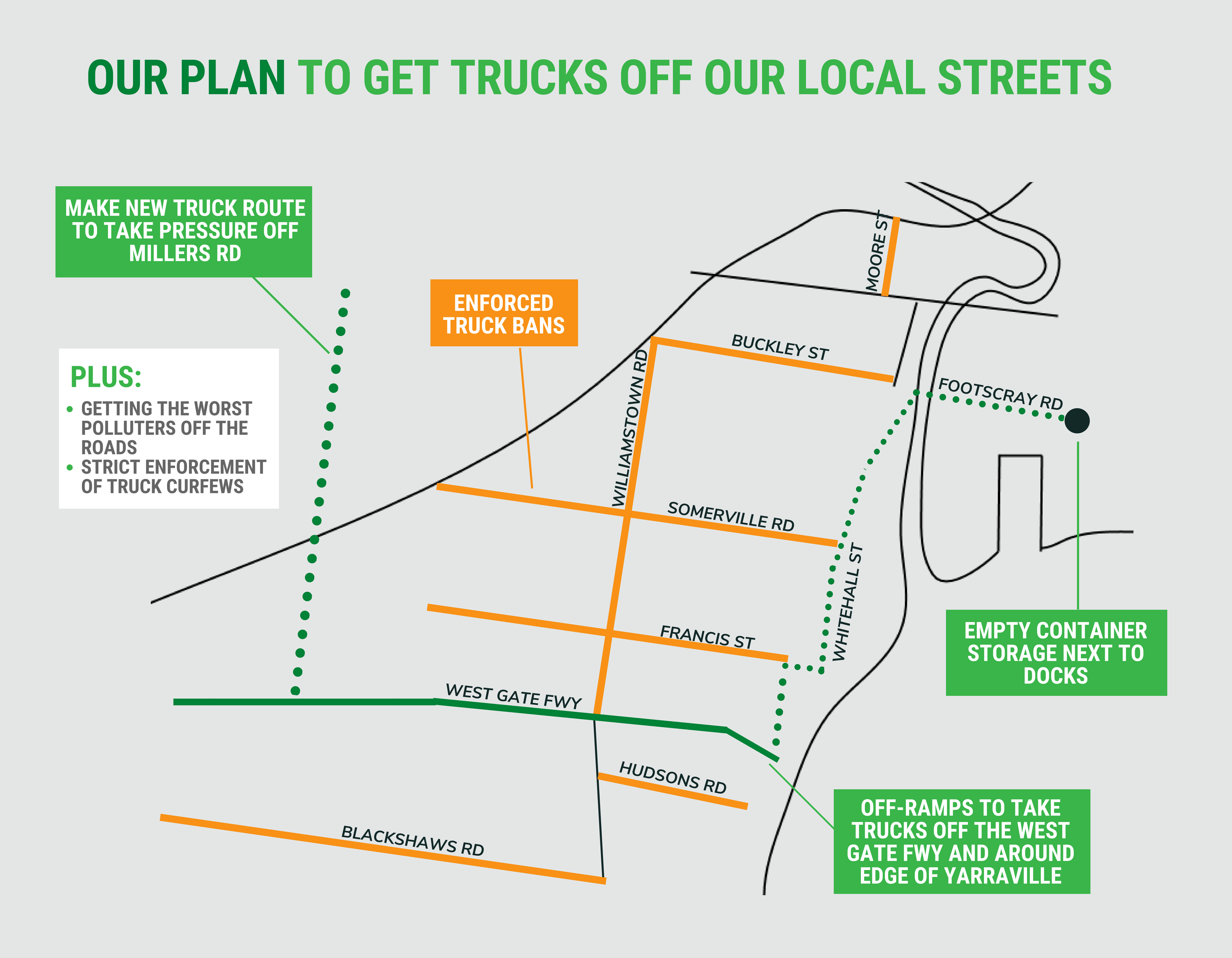 "The port rail shuttle can halve the number of trucks using the port. We must get this built ASAP" - Huong Truong 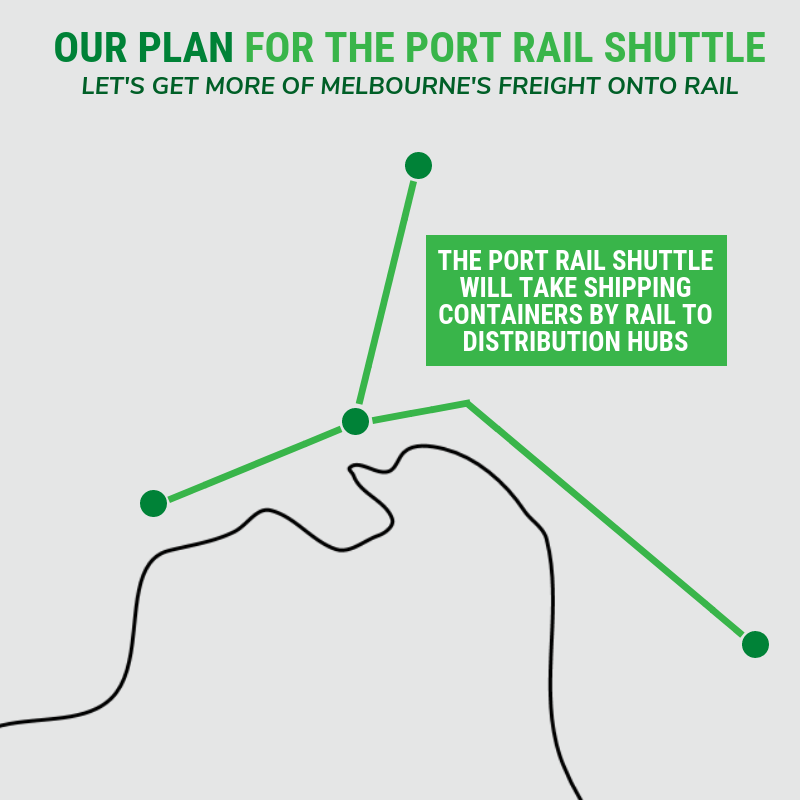 The finer details for freight

Build the Port Rail Shuttle, which would move shipping containers from the port by rail to three distribution hubs around Melbourne, halving the number of trucks using the port.

The shuttle needs to connect with interstate freight via the Western Interstate Freight Terminal, which would also be built within two years. At the same time, investigate rail access to Webb Dock. Most of the infrastructure is already in place, so this could be up and running quickly.

Plans have been on the table for over a decade for the port rail shuttle, the Andrews Government has said they will build it - but is behind schedule and has had a key party pull out. The Greens will make sure it is built.

Get the worst polluters off the roads by phasing out trucks manufactured before 1995 from using the Port, unless they meet minimum emissions standards. Before 1995 trucks had no emissions standards at all (besides for smoke), and the standards introduced in 1995-96 allowed more than 10 times as much particulate pollution as the current standard.

Implement truck bans up to two years ahead of the West Gate Tunnel bans, while diverting truck traffic away from residential streets.

Commit $600 million to build a truck alternative to the tunnel, including off-ramps to take trucks off the West Gate Freeway and around the edge of Yarraville and creating an alternative route to Millers Road, so people living there don’t pay the price for truck bans in Yarraville.

Use the old market site across from the docks to store empty shipping containers, cutting down on trucks movements through the western suburbs by potentially thousands of trips per day.

Work with Greens in federal parliament to fight for better truck emission standards, which could cut the allowable amount of diesel pollution from trucks by 80%.

The Greens are calling for the full implementation of the Greens’ Transport Master Plan for the West instead of the West Gate Tunnel toll road project.

The West Gate Tunnel locks in trucks as the primary source of moving freight. More trucks and more pollution.

And while it takes trucks off some inner west streets, it adds more to others. The residents of the northern section of Millers Road are set to pay the price for the rest of the inner west, with an extra 4,000 trucks past their front doors every day. That's why we are helping a grassroots, community campaign to Stop The West Gate Toll Road.

It also locks in car dependency and spends billions of dollars which could be spent on public transport.

The Greens believe the West Gate Tunnel should be cancelled, and if elected would move immediately to investigate the logistics and costs of cancelling Labor’s secretive contract.

Our neighbourhoods can have truck bans sooner, better air quality and safer streets for a fraction of the cost with our smarter freight plan.