Note: These policies were released as part of the Greens' 2019 Policy Platform Find out what's next »

If everyone paid their fair share of tax, we'd all get a fair go at living a decent life.

The Greens are building a world where everyone has what they need for a decent life, where essentials are either free or low-cost, our jobs are meaningful, our environment is protected and restored back to its proper health.

Our economic plan is based on a few simple premises. That:

Right now our economy doesn’t work for us. Big corporations are using their influence and their political donations to gain more and more for themselves, while many people across our communities are struggling to afford a roof over their head or to put food on the table.

Since 2012, both Liberal and Labor governments have taken over $100 million from big corporates and in return, they’ve sold our public assets to those vested interests, protected their record profits and left big loopholes in our tax system, to the point where 1 in 3 of the biggest corporations pay no tax at all.

It doesn't have to be this way.

Being a good economic manager should mean that your plan works for people and communities, not solely for enormous private profit. It means you share the enormous wealth in our society by prioritising investment in public services for everyone – in world class accessible social services, education, healthcare and affordable homes. 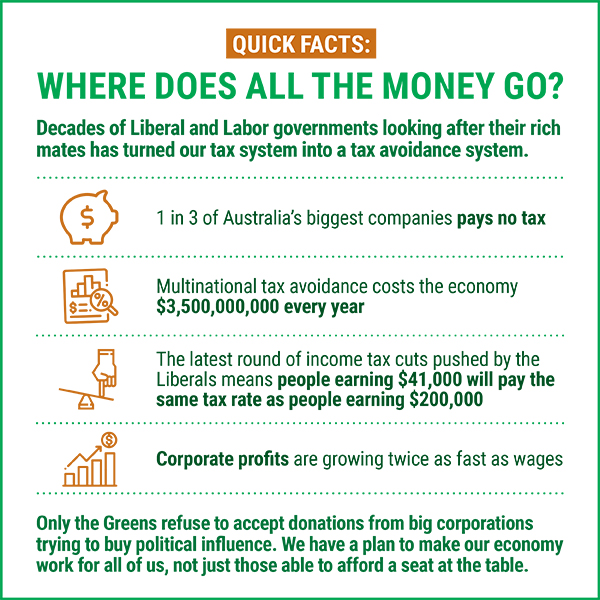 Our plan to make our economy work for all of us, and put billions of dollars back into public services:

A tax on super-profits

The mining, oil and gas industries exploit our environment for their own super-profits and an unfair tax system means many don’t pay for these natural resources. The result: less money for the public services we all need to live a good life.

Companies in some industries make super profits not because of their skill, innovation or hard work but because government sets the regulatory and tax settings in their favour.

Australia is now the world’s biggest gas exporter. These offshore gas companies will make billions over the next 40 years but never pay a cent in royalties and may never pay a cent in tax either. They get our gas resources completely free and the major parties won’t change that arrangement because they have received millions in donations from these companies.

The Greens would set royalties for gas extraction and wind back the staggering $367  billion worth of tax credits they are sitting on.

For mining companies, we would implement the recommendations of the Henry Tax Review by introducing a 40% super-profits tax on very profitable mining ventures to ensure more wealth is shared with the community.

Our plan would reclaim those super-profits from the mining and gas industries to invest directly in improving public services and infrastructure.

1 – Financial implications prepared by the independent Parliamentary Budget Office are costed and current as at 2018-19 Mid Year Economic and Fiscal Outlook.

Ending corporate handouts from the government

We can build a future for all of us, and create a truly sustainable economy with quality public services, but only if we reverse decades of terrible decisions by Labor and Liberal governments that reward industries which are causing social and environmental damage.

Government subsidies to mining companies make it more profitable for them to run their operations and pollute our environment. Subsidies to destructive industries cost the economy billions each year - money that could be spent on schools, hospitals and other public services. These handouts are a reward to the big corporate donors of the two major parties.

The Greens also have a plan that will take on the vested interests in health insurance and the military, cutting unnecessary spending and investing billions into the public services everyone relies on.

Tax-Free Fuel Rebate: The Greens plan scraps the tax-free fuel rebate for mining companies. This is the government’s 17th biggest expenditure item, just below funding for public schools and has given an enormous benefit to some of our largest and dirtiest companies.

Private Health Insurance Subsidies: We would remove the public subsidies that line the pockets of private health companies yet do nothing to take pressure off the public health system. This disproportionately benefits those who can afford private health insurance, while taking money out a system which is available to all of us. The Greens will reinvest this $6.5 billion a year back into the public health system to pay for our plan for health, including the expansion of Denticare.

Weapons Exports: Our plan cuts back the billions the government hands over to weapons exporters and those who make money from war and misery. Billions of dollars have already been thrown at our military and weapons manufacturers with almost no scrutiny and for no overriding purpose. And still the Liberals, supported by Labor, are intent on making Australia a top 10 global arms exporter. Our government has shamefully committed almost $4 billion to assist arms exporters to do deals with human rights abusers like Saudi Arabia. (Also see our policy on peace and demilitarisation).

2 – Financial implications prepared by the independent Parliamentary Budget Office are costed and current as at 2018-19 Mid Year Economic and Fiscal Outlook .

Our biggest polluters are so profitable because they get to pollute for free. Macquarie University calculates that this looting has totalled a staggering $9.5 trillion of corporate profits since 1995, with communities forced to clean up the mess left by these big polluters.

The Greens support a carbon price as the simplest, fairest, most effective way to reduce emissions, drive a transition in renewables and reduce household costs. Under our plan, we will legislate to re-introduce an economy-wide carbon price on direct emissions from facilities which emit more than 25,000 tonnes of CO2-e per year.

3 – Financial implications prepared by the independent Parliamentary Budget Office are costed and current as at 2018-19 Mid-Year Economic and Fiscal Outlook .

Profits made by multinational corporations in Australia are soaring. These enormous businesses get so much out of our society, but many are not giving anything back. They use every method available to avoid paying their fair share of tax, if they pay any at all.

We don’t have a tax system anymore, we have a tax avoidance system - and Australians are sick of it. They’ve had enough of multinational companies and the super rich treating tax as an optional extra. That’s why the Greens have a comprehensive plan to stop the $11 billion a year  tax avoidance industry. We’ll focus on enforcement, changes to our tax laws, public disclosure and global action.

Trusts & Transparency: Our plan cracks down on the tricks of tax avoidance, like income splitting through trusts, and reduces the threshold for public reporting to $50 million to provide greater transparency over the tax affairs of the biggest companies in the country.

Buffett Rule: Under our plan, a Buffett Rule will be introduced so the super rich will have to pay a baseline amount of tax, no matter how many deductions they use. With this Buffet rule in place, we can make serious inroads in eliminating poverty and economic inequality.
Every year, we hear news stories about the millionaires in Australia who paid accountants to reduce their tax bill to zero - so they don’t even pay the Medicare Levy. Our plan is to cap those deductions so that someone earning above $300,000 a year - the richest 0.5 percent of the workforce - could no longer deduct to a level below 35 cents in every extra dollar earned.

Resource the ATO: The Greens would also resource the Australian Tax Office (ATO) so they can do their job well. We would re-create the 4,400 ATO positions taken away by Labor and Liberal governments since 2012. Our plan would also require accurate and timely reporting on tax avoidance, including a settlements register to detail any arrangement reached with the ATO.

Benefits of our plan

4 – Financial implications prepared by the independent Parliamentary Budget Office are costed and current as at 2018-19 Mid-Year Economic and Fiscal Outlook .

Everyone should pay their fair share of tax in order to contribute to a fairer, more equal society. Our taxes pay for the things we all need, like schools, hospitals, public transport and infrastructure. No one should be above contributing to a fairer society for all of us.

The tax cuts which have already passed the Parliament will turbocharge economic inequality and wipe out our progressive tax system - for example, a graduate nurse on $41,000 will pay the same rate of tax as a financial adviser on $200,000. We can create new jobs by reversing these unfair tax cuts and investing in the public services we want and need.

Company tax cuts for banks and mining companies will do nothing to help ordinary Australians as public services deteriorate. And because of Australia’s dividend imputation system, company tax cuts will only benefit foreign investors. The ‘trickle down’ approach to economics has failed for thirty straight years.

These giant businesses don’t need a tax cut, they need to start paying tax so government can pay for the services that we all need to live a good life.

The Greens will reverse any company tax cuts for businesses earning more than $10 million per annum by restoring the tax rate to 30%. Small businesses would still keep their current tax rate.

Only the Greens will unequivocally oppose further tax cuts to big corporations and the wealthiest Australians. We should be sharing the enormous wealth in our society by investing in public services, not handing out tax cuts.

Benefits of our plan:

5 – Financial implications prepared by the independent Parliamentary Budget Office are costed and current as at 2018-19 Mid-Year Economic and Fiscal Outlook .